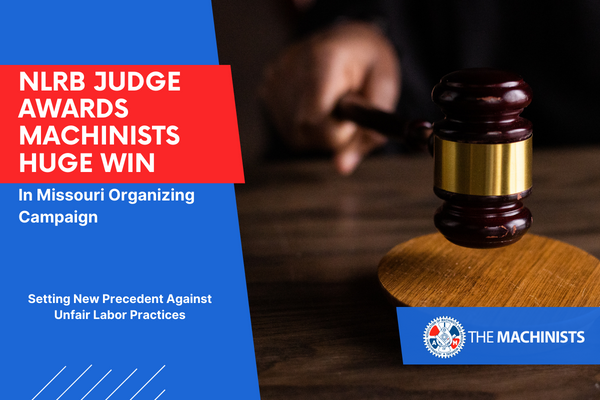 The dispute began in January 2022, when the IAM filed a petition with the NLRB seeking to represent full-time and part-time production and maintenance employees at MAC. Thereafter, MAC contracted with Sparta, a labor consulting company, “to provide a ‘systematic, organized counter-campaign to secure an election win,'” the Judge wrote.

In doing so the company conducted mandatory anti-union captive audience meetings where employees were threatened with unspecified consequences for voting for the Machinists, freezing wages, and even surveillance. MAC also fired three workers – union supporters for protected activities.

In his decision, the judge ruled that MAC and Sparta cease and desist from their unlawful conduct and that the Machinists be recognized as the exclusive representative of the bargaining unit, and upon request, bargain with the IAM. The ruling also calls for the terminated employees to be returned to work and made whole, including wages and benefits.

“The IAM is proud to stand with employees at Motor Appliance Corp., and any worker who is subject to mistreatment on the job due to their desire to form a union,” said IAM Midwest Territory General Vice President Steven Galloway. “We look forward to further representing Motor Appliance Corp. workers and bargaining a strong union contract – one that protects each worker’s dignity and rights. These findings should put all employers – who wish to violate their workers’ rights to form a union – on notice, and should empower all workers to push forward in their fight to bargain collectively for better rights on the job.”