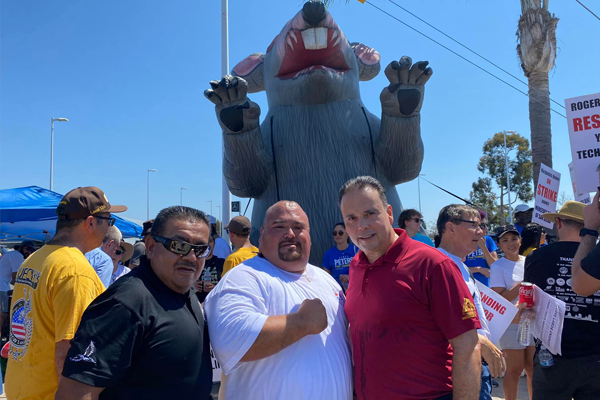 IAM Local 1484 members at Mercedes-Benz of San Diego, who have been on an unfair labor practice (ULP) strike at Mercedes-Benz of San Diego since June 16, held a Labor Day rally and press conference to highlight unfair labor practices and demand the dealership put forward an honest effort in negotiations allowing them to operate as union factory-trained technicians. The rally was supported by members of the San Diego and Imperial Counties Labor Council and elected officials.

An unfair labor practice (ULP) strike occurs when workers strike over an employer’s unfair labor practice. For months, management has decided to hire outside technicians that are not certified at a higher rate of pay, leaving out the workers with a combined 400+ years of Mercedes-Benz experience.

“I am proud of my fellow technicians who put their careers on the line to fight for the respect and dignity we deserve,” said IAM Local 1484 Member and Lead Technician Francisco Oseguera. “I am fighting to ensure the younger auto technicians that come after me will have a strong union contract to hold management accountable. Without the experienced auto technicians, there is no service department.”

“We are in this fight to protect our industry and to grow the union density in the San Diego area,” said IAM Local 1484 Chief Shop Steward and Master Technician Pedro Gomez. “We will either be heroes or martyrs with this strike, but either way, we are winning.”

About 35 San Diego-area IAM Local 1484 (District 190) auto technicians at Mercedes-Benz of San Diego are picketing after extensive negotiations with Penske management for a new union agreement. The Labor Day press conference and picket action were held in response to the unlawfully changed working conditions and unfair labor practices in the process.

“I am so proud of our members’ courage and patience in this battle against a big company,” said IAM District 190 Area Director Kevin Kucera. “We will do everything we can to overturn these unfair labor practices and get our members back at performing their craft. We will fight to the bitter end to bring justice for our members and their families.”

“I couldn’t think of a better place to be during Labor Day than with our members at IAM Local 1484,” said IAM Western Territory General Vice President Gary Allen. “These technicians are true fighting Machinists, and I am proud to stand with them on this holiday that celebrates the dignity of work. We all must stand behind the technicians because the San Diego community wins when they win.”