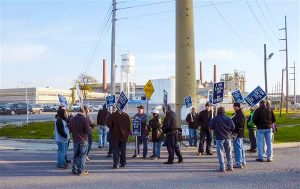 IAM District 54 members at Libbey Glass in Toledo, OH were on strike for two weeks before accepting a new, improved contract.

Nearly 115 IAM members at Libbey Glass in Toledo, OH, who went on strike after overwhelmingly rejecting a so-called “last, best and final offer” (LBFO) from the company, have voted to accept a new contract that holds the line on many membership concerns.

The IAM Local 105 (District 54) members were joined on the picket lines by Glass Molders and Pottery Workers (GMP) Local 59 at midnight, October 12, when their contract extension expired. IAM members, however, didn’t return to the plant, instead honoring the picket line of GMP members, who rejected the revised offer from Libbey Glass.

Sticking points in the dispute were working conditions, wage increases, mandatory overtime and a draconian attendance policy. IAM Negotiators remained at the bargaining table to negotiate with management at Libbey Glass, and brought the most recent offer that improved or removed the company proposals from the agreement to a ratification vote. Just as important, with an aging workforce, company-paid health care benefits will be reinstated retroactively to the date the work stoppage began.

“These members proved that we have the power to speak out, demand the elimination of mandatory overtime, fair scheduling, a safe work environment, decent wage increases and good benefits for their families, said District 54 President and Directing Business Representative T. Dean Wright, Jr. “Three unions exercised their legal rights, and voices in solidarity; I am so proud of the local community, and the local unions of the AFL-CIO for their support during our fight for the working families of Ohio.”

IAM members returned to work on their assigned shifts on Wednesday, October 26.

“Congratulations to the membership, officers, negotiating committee and shop stewards,” said Eastern Territory General Vice President Jimmy Conigliaro, Sr. “Together they demonstrated true labor solidarity—walking out for their fair share and then honoring the picket line of their union brothers and sisters. My thanks go out to Dean Wright, Business Representative Nick Kent and the entire District 54 staff for their leadership during a difficult negotiation.”