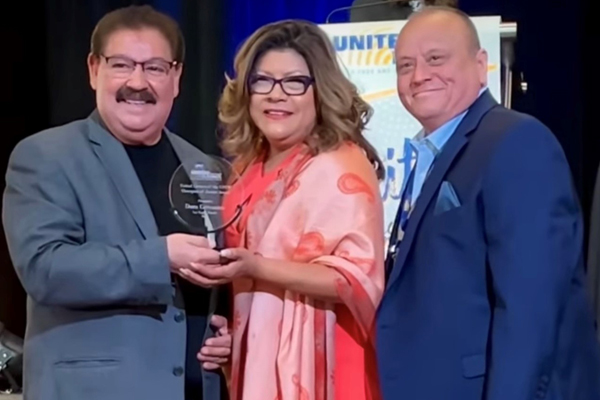 The award recognizes leadership that strengthens and supports Latino workers and the Latino community at large. Each recipient must demonstrate work that improves the lives of the Latino community within the North American labor movement and promotes diversity and inclusion at all levels.

“This is a union we have a super great relationship with and Dora is an amazing leader,” said Rigoberto Valdez Jr., President of United Latinos of the UFCW.

“Dora Cervantes is a trailblazer in every regard,” said Mendez. “An outstanding trade unionist and a person of substance and respect.”

Cervantes has served as General Secretary-Treasurer since 2015, the first woman to hold the position. She initiated into IAM Local 2198 in Houston in 1989 as a Southwest Airlines Reservations Agent and later went on to serve as Organizer, Shop Steward, Recording Secretary and Vice President.

“I’m a proud Latina. I’m proud to speak Spanish. And I’m even more proud of my brown skin which allows people to seek me out when they need help understanding English or Spanish in everyday situations,” Cervantes told the audience. “My union, the IAM, added to my confidence and added to my strength to be the advocate and the voice for those who cannot be heard. I am honored and humbled to receive this award and I am forever grateful to the United Food and Commercial Workers.”

The United Latinos of the United Food and Commercial Workers (UFCW) is an organization of union members and allies who have joined together to promote issues and pursue interests important to Latinx workers.