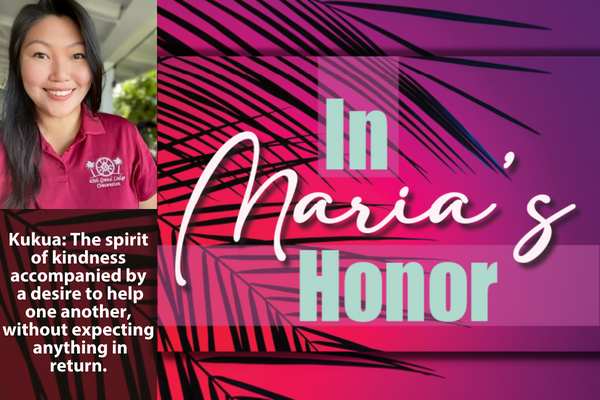 One of the goals of the Maria Santiago Lillis Advocacy Day – A Commitment to Serve (ACTS) is to highlight a member who exemplifies the qualities that made Sister Lillis an outstanding advocate for working families. For the first dedication, it makes sense to select someone who Santiago Lillis mentored and developed into the leader they are today.

Jan Suster is from Santiago Lillis’ own Local 1998. Santiago Lillis took the time and energy to mentor Suster, now a Western Territory Special Representative, over the years.

Santiago Lillis wanted the best for everyone and she would have been elated that Suster, someone she mentored, has taken on a leadership role in the Grand Lodge for the Western Territory.

“Corporate America has done an amazing job making people feel small, irrelevant, and uninfluential,” said Suster. “Maria broke this stigma by inspiring people to believe in themselves. Through her mentorship, I saw people overcome and rise as leaders. These new leaders not only believed in themselves, they believed they could make a difference.

“With Maria at the helm, she made the impossible, possible,” continued Suster. “In my eyes she was larger than life, she was hope. Maria’s devotion and drive for a better tomorrow renewed my faith in unions and humanity. She is my role model. Although she wasn’t without flaws, her dedication to her beliefs was infectious. That’s when I decided I wanted to carry on her legacy for years to come.”

Suster has already followed these words of wisdom with her own actions. She began her career with the IAM as an office assistant for Local 1998 in 2016. She was hired as an organizer in 2018 and promoted to a business representative in 2021. Effective June 2022, Suster has served as a Special Representative assigned to the Western Territory. She is active within Hawaii AFL-CIO, Hawaii Metal Trade Council, Center for Labor Education and Research (CLEAR), and Appleseed, an organization fighting for economic justice.

“The Western Territory, and the entire IAM, continues to mourn the loss of our Sister Maria Santiago Lillis,” said IAM Western Territory General Vice President Gary R. Allen. “As we march into the future and carry on Maria’s legacy, it gives us all great pride to continue exemplifying the service that Maria dedicated her life to. This year, we are thrilled to recognize one of our own, Sister Jan Suster, for putting into action what Maria stood for—service, solidarity, and a dedication to a better world for all working people.”

“We help make our members’ lives better by being a part of their lives,” said Suster. “We stand with them, support them through all of life’s struggles. We feel every hardship, every triumph like it’s our own. As a union, we address the fundamentals: wages, health, and retirement. We demand equal opportunity and respect in the workforce. In turn, we help shape the labor standards for all—union and non-union. But, as an organization called to serve, the IAM is so much more.

“‘Kokua’ in a literal term means to help or to assist,” said Suster. “In Hawaii, Kokua is a lifestyle, not just a word. In the IAM, our Kokua is what sets us apart.”