Immigration Bill Would Offer Pathway to Citizenship for Millions 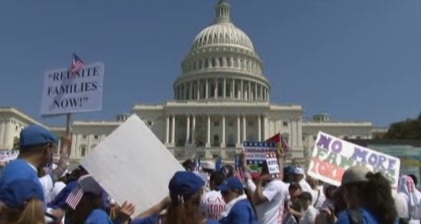 Thousands of immigrant families, advocates and union members rallied in support of an immigration law that would treat undocumented Americans with respect.

“We will pass immigration reform this year,” Rep. Luis Gutierrez (D-IL) told the crowd from the steps of the Capitol. “The time is now! It’s time to bring your family and friends out of the shadows!”

A bipartisan group of senators known as the “Gang of Eight” have drafted a bill that includes a pathway to citizenship for undocumented Americans while also stepping-up security at our southern border and tracking whether legal immigrants have left the country when required. The “Border Security, Economic Opportunity, and Immigration Modernization Act” (S. 744) would also allow businesses to hire immigrant workers in a timely manner when Americans are unavailable or unwilling to fill the jobs.

“Some of these people are married to American citizens or have kids that were born here and are in the school system,” said Cervantes. “Families are split up, separated and uprooted. These people pay taxes and contribute to the economy of this country. People should not have to live in fear.”

The Senate Judiciary Committee plans to hold its first discussion of the bill on May 9. Click here to watch a new Machinists News Network video of the rally and an interview with Cerventes.