In the IAM, We’re Proud to Be an Ally for All 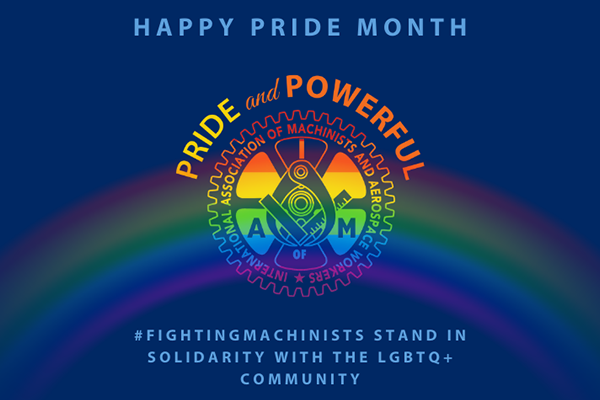 The month of June is nationally recognized as Lesbian, Gay, Bisexual, Transgender and Queer/Questioning (LGBTQ+) Pride Month in commemoration of the Stonewall Uprising of June 1969 in New York City.

For Pride, the Machinists Union is celebrating members of the LGBTQ+ community and raising awareness of discrimination and injustice LGBTQ+ people and workers are still fighting against.

It was only in 2020 that the Bostock Supreme Court ruling federally outlawed discrimination against LGBTQ+ workers in the United States. Before this ruling, it was legal in 28 states to fire workers for their sexual orientation

The Machinists are an allied union with Pride at Work, an AFL-CIO constituency group that organizes mutual support between the labor movement and the LGBTQ+ community to further social and economic justice.

In alliance with Pride at Work, the Machinists advocate for a strong and progressive labor movement that promotes full equality and respect for LGBTQ+ workers and their families. Union contracts can protect LGBTQ+ workers from discrimination, unfair treatment and harassment in the work place.

IAM believes LGBTQ+ rights are workers’ rights and pledges to fight for those rights with LGBTQ+ brothers and sisters every day.

To get involved with Pride at Work, check out their website and follow them on social media, @prideatwork.