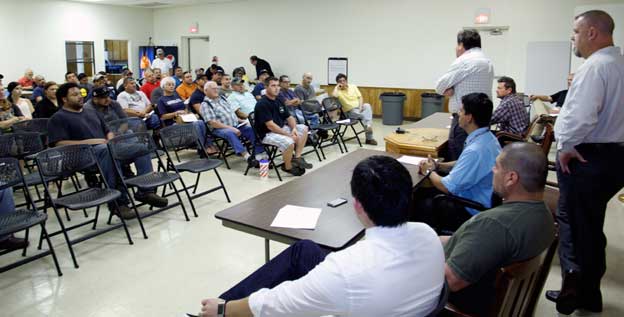 Click here to watch the Machinists News Network’s behind-the-scenes video on the ratification.

The three-year accord includes pay hikes of 2.5 percent for the first year and 3 percent for each of the second and third years. The Local 2916, District 776 members at L3 will now have a secure retirement with the IAM National Pension Plan and a 6 percent yearly cap on health insurance premium increases.

“Thank you to IAM Aerospace Coordinators Jody Bennett and Terry Smith for their assistance through this negotiation process. At a time when most non-union employees are losing their pensions or never have one, the IAM successfully negotiated a new pension for these workers,” said IAM Southern Territory General Vice President Mark Blondin. “It’s time to stop playing defense in Texas and start organizing workers hungry for decent wages and a voice on the job.”

In June, L3 office and clerical employees voted 219 to 149 for IAM representation. This followed an April organizing win for 450 helicopter mechanics and technicians at the same facility. The IAM represents nearly 26,000 Service Contract workers at 597 sites around the country.