Inside an IAM Member’s State of the Union Experience 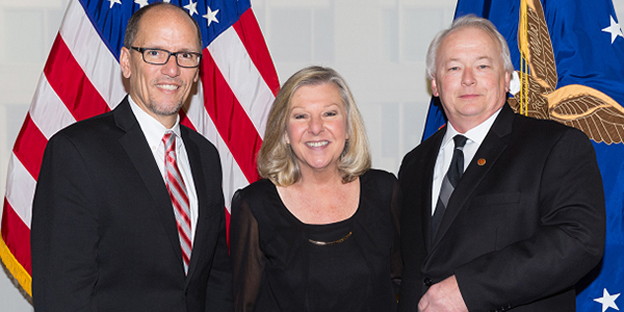 Norb Balenski, a 30-year member of IAM Local 701 in Carol Stream, IL, and his wife, Gloria, were recently invited to Washington, DC to be personal guests of First Lady Michelle Obama during the President’s final State of the Union Address.

About a year ago, Gloria wrote a letter to Obama thanking him for bailing out General Motors, a move which likely saved Norb’s career during the 2008 economic downturn. Just before the President saved GM, Gloria had lost her job to outsourcing and Norb’s job at Castle Chevrolet in Villa Park was their sole source of income.

Like many Americans, the Balenskis were concerned what could happen if General Motors was allowed to fail.

“The Republicans didn’t care if GM failed,” said Norb “I’m in my 50’s now, who was going to hire me if GM went under? Would I have to learn a new career?”

In 2012, the Balenskis were again reminded of the importance of the Presidents move to save GM when Norb suffered a heart attack, racking up over $400,000 in medical bills. With GM now back on its feet, Norb and Gloria still had insurance through his union contract. The Balenskis were saved from financial ruin.

Shortly before Christmas, a White House official called the Balenskis to check in and wish them a merry Christmas on behalf of the President.

“At first I thought it was a scam or someone trying to sell us something,” said Norb, “It wasn’t until they started quoting lines from my wife’s letter that I realized it was real. Shortly before New Year’s, they called back to invite us to the State of the Union address. We were shocked. Why us?”

The White House flew Gloria and Norb to Washington, DC where they were treated to a private tour of the Capitol by an aide to Sen. Dick Durbin (D-IL) and met with Labor Secretary Tom Perez. On Tuesday afternoon, Norb and Gloria attended a White House reception, where they met Michelle Obama, along with her other guests.

The Balenskis met Vice President Joe Biden and his wife, Jill; the first woman Army Ranger; and a 12-year-old boy who started his own non-profit providing healthy meals to the homeless.

On Tuesday night, Gloria went to the State of the Union address at the Capitol and sat with Michelle Obama and the rest of her guests while Norb watched the address from the White House.

“It was an experience we will never forget,” said Norb. “It still hasn’t all sunk in.”

“Norb and Gloria represent the millions of Americans that benefited from the President’s move to save the automakers” said Bill LePinske, Norb’s Business Representative. “Their story is similar to many of our members’ stories whose families were saved by the bailout.”