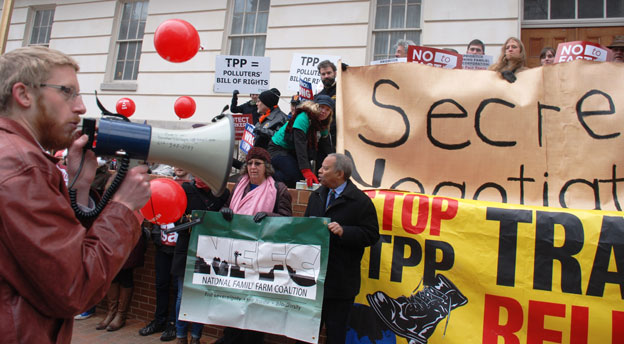 The IAM and a broad coalition have voiced concerns with the secretive negotiations of the Trans-Pacific Partnership (TPP) for more than five years.

The announcement of an “agreement in principle” on the Trans Pacific Partnership (TPP) between the United States and 11 other Pacific Rim nations brings workers just steps away from facing the consequences of the largest corporate-inspired trade deal in history.

“As a labor union whose members build products that are exported all over the world, the IAM has always taken a strong interest in the development and growth of international trade,” IAM International President Tom Buffenbarger said in a statement. “Unfortunately, the recently concluded Trans-Pacific Partnership (TPP) represents a new low in corporate dominance of our nation’s trade agenda. Despite the rhetoric, this deal represents a step backward in efforts to achieve effective labor standards and human rights.”

If approved by Congress, the TPP will vastly expand the free trade policies that have previously failed millions of American workers and closed thousands of factories across the country. For more than five years, organized labor and many elected officials have voiced their opposition to the trade deal dubbed “NAFTA on steroids” for good reason.

Environmental standards enforcement and currency manipulation are among many other parts of the agreement that should have been openly scrutinized. The secrecy of the deal, along with unfulfilled promises for American workers from previous partnerships, continues to raise valid concerns across the country.

“As job and income growth continue to stagnate, Americans know that the economic system is rigged against them and the TPP is just the latest example,” concluded Buffenbarger. “Congress must put the American people first and reject this deeply flawed trade agreement.”