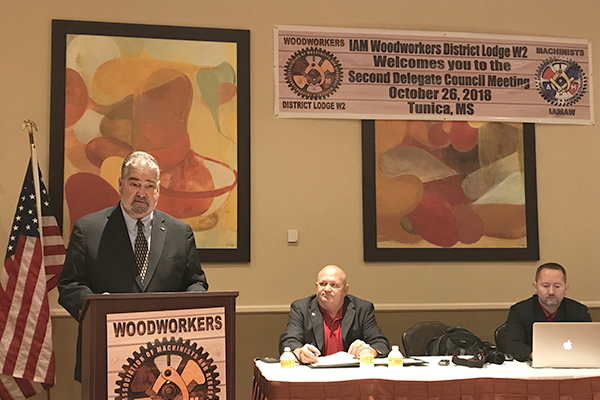 The Machinists Union continues to do everything it can to assist members affected by layoffs at Red River Army Depot, International President Bob Martinez told delegates to the IAM District W2 Council Meeting in Tunica, MS.

“I am here to tell our members at Red River that this union will never wave the white flag and we will always have your back,” said Martinez. “When we first saw these layoffs coming earlier this year, I directed every resource available at the Grand Lodge to assist in whatever way possible to defend our membership.”

Approximately 1,000 members of IAM Local 1243 and NFFE-IAM Local 2189 who work at the Texarkana, TX depot have been affected by the layoffs.

In response, the IAM has been mobilizing politicians locally and on Capitol Hill, as well as amplified the voices of families dealing with the aftermath in the press. IAM staff has been on the ground to hold job search training. IAM resources remain ready to fight any future layoffs.

“Our message throughout all of this has been simple—our national security is at risk if we lose the talent and experience of the skilled men and women at Red River,” said Martinez. “If we go to war tomorrow, we will need their expertise to maintain the fleet of Army vehicles that keep our service members safe.”

“This fight is far from over for the Machinists Union,” said IAM’s Southern Territory General Vice President Rickey Wallace. “There’s not an avenue we aren’t investigating to bring these jobs back to Red River and restore the faith of our members and their families who have worked tirelessly throughout the years to guarantee the U.S. Military always had the tools it needed to protect this country and its citizens.”

Martinez also spoke about the new direction of the IAM. The union has organized more members in 2018 than in any year in the past 24 years.