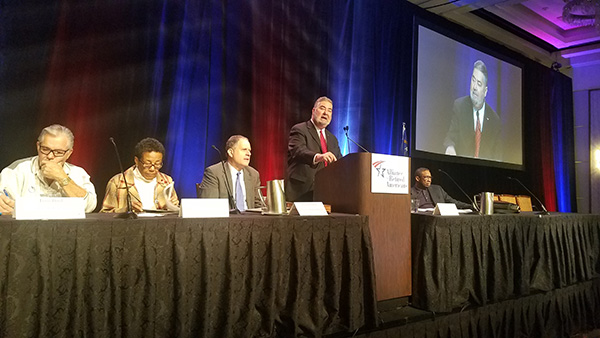 The Machinists Union is proud to fight for the dignified retirement of every working American, International President Bob Martinez told delegates at the Alliance for Retired Americans’ membership meeting in Las Vegas.

“Brothers and Sisters, I am here to tell you today that we will never be stopped if we stand together,” said Martinez. “I firmly believe that the labor movement is on the verge of a resurgence like we have not seen in our lifetime.”

“Ever since the Alliance was born in 2001, the Machinists have been proud to stand by your side,” said Martinez.

“The government did not hesitate to bail out Wall Street. Now it is time to help Main Street,” said Martinez.

The Alliance for Retired Americans is a nationwide grassroots organization with more than 4.3 million members working together to make their voices heard in the laws, policies, politics, and institutions that shape American life.