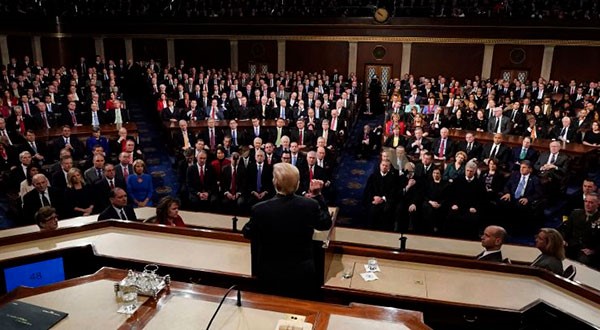 Machinists Union International President Robert Martinez Jr. is attending the State of the Union address as a guest of U.S. Rep. Donald Norcross (NJ-01) to sound the alarm on securing back pay for federal contract workers after the longest government shutdown in U.S. history.

Norcross recently introduced the bipartisan Fairness for Federal Contractors Act (H.R.  824) to retroactively pay up to $1,400 per week to the more than 1 million federal contractors who were impacted by the 35-day long shutdown. The IAM highly supports this legislation.

READ: We’re attending the State of the Union to fight for federal contractors The Hill

“For over a month, I’ve been speaking with thousands of federal contractors who have to catch up on mortgages, student loans, school tuition, car loans, health care premiums, daycare and many other financial obligations because of this painful shutdown. It’s heartbreaking,” said Martinez. “The Machinists Union proudly represents thousands of federal contractors, many of whom are veterans, who provide critical services to several government agencies from NASA to the FAA. We wholeheartedly support the Fairness for Federal Contractors Act introduced by U.S. Rep. Donald Norcross to make sure these workers receive the back pay they deserve.”

TAKE ACTION: Use our online form to tell your member of Congress to co-sponsor the Fairness for Federal Contractors Act (H.R. 824)

Approximately 5,000 out of the nearly 35,000 federal contractors represented by the Machinists Union lost wages or paid leave because of the recent government shutdown, including IAM members who work as contractors at NASA, the FAA, HUD, the U.S. Air Force and more.

“Federal workers and their families endured incredible hardship during this government shutdown at no fault of their own – and it’s clear they should not have to lose their paychecks,” said Norcross. “During my career as an electrician, we often worked hand-in-glove with government entities and President Martinez, a former aircraft assembler, did too. As President Trump addresses the state of our union, we’re hoping he talks about making all hardworking Americans whole who were negatively impacted by the reckless shutdown he caused. Contractors and employees work side-by-side and their pain is just as real.”

Read IAM International President Martinez’s letter to members of Congress urging them to support the Fairness for Federal Contractors Act.