It’s Past Time to Adequately Protect Workers from Harmful Chemicals 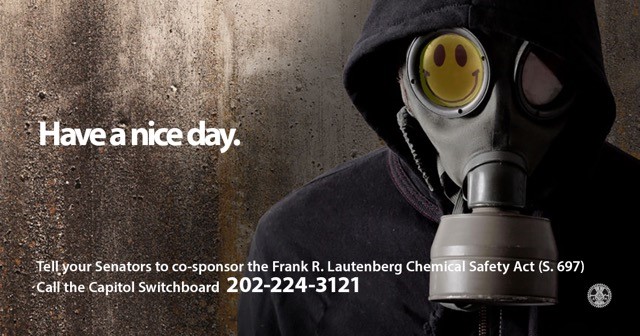 The IAM is calling on members of Congress to pass legislation to empower the Environmental Protection Agency (EPA) to regulate potentially dangerous chemicals before they hit the market, rather than after American workers and their families have been exposed. The Frank R. Lautenberg Chemical Safety for the 21st Century Act (S. 697) will empower the EPA to regulate chemicals already in commerce as well as new ones before they hit the market.

TAKE ACTION: Call your Senators at 202-224-3121 and tell them you support the Frank R. Lautenberg Chemical Safety for 21st Century Act.

Our nation’s main chemical safety law, the Toxic Substances Control Act of 1976, (TSCA), does not require chemicals to meet even a basic safety threshold in order to be made, sold and used. Of the thousands of chemicals made today, only a tiny fraction have been thoroughly reviewed for safety.

Under the Lautenberg Act, the safety of chemicals would be judged against a pure, health-based safety standard, instead of current TSCA’s onerous cost-benefit standard.  It would provide special protections for vulnerable groups, including workers whose exposures to chemicals are often much greater than those of the general public.

Under our current chemical safety law, EPA has banned limited uses of only five chemicals since the 1970s, despite overwhelming evidence that some chemicals on the market today can seriously impair worker and public health. According to the World Health Organization, more than 100,000 people die each year from asbestos-related diseases from workplace exposure alone. And yet in the early 1990s, the EPA’s decade-long effort to ban this deadly substance was shot down by a federal court ruling that the agency had not met its high burden of proving harm under the law.

To this day, asbestos can legally be used in household products and materials, and the EPA hasn’t tried to regulate a single toxic chemical using TSCA since.

“Our members deserve the ability to work without the fear of exposure to known carcinogens and other dangerous or untested chemicals while on the job – just as consumers have the right to know that the products they buy aren’t hurting their families,” said IAM International President Tom Buffenbarger. “It’s long past time to fix our broken system. Congress should pass the Lautenberg Act now.”