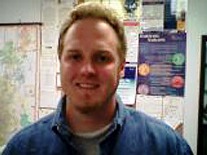 Painters and Allied Trades (IUPAT) member Robin De Haven is being hailed nationally as a quick-thinking hero for his actions after anti-IRS fanatic Joseph Stack crashed his private plane into an Austin, TX, office building.

De Haven, a 26-year-old Iraq war veteran, who is also a graduate of the Helmets to Hardhats program, immediately drove his truck to the burning building and positioned a ladder to reach people trapped on the second floor. When the people in the building were unable to safely descend, De Haven scrambled up the ladder, climbed in the building and broke out another window, helping five people to escape the flames and smoke.

“ His actions were nothing short of heroic and we’re proud to have him in our ranks,” said IUPAT President Jimmy Williams. “Robin’s courage and character are a shining inspiration in these hard times. I hope his actions remind us all of what is most dear in our lives, and how important it is to take care of each other. Robin De Haven is a prime example of what a good union member is made of.”

The Helmets to Hardhats program helps match vets and soon-to-be vets with apprenticeship and training programs offered by the 15 unions in the AFL-CIO Building and Construction Trades Department.