Join the 2013 March on Washington 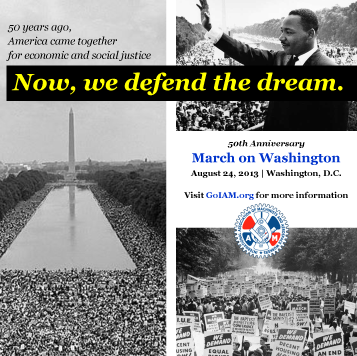 August 28, 2013 will mark the 50th anniversary of the 1963 March on Washington for Jobs and Freedom, the backdrop to Martin Luther King, Jr.’s famous “I Have a Dream” speech.

As part of a week-long series of events to commemorate the anniversary, the IAM is joining thousands from civil rights, labor, faith-based and community groups on Saturday, August 24 for a 2013 “March on Washington” to keep alive the tremendous spirit for social change generated 50 years ago.

The original march paved the way for passage of the 1964 Civil Rights Act and the 1965 Voting Rights Act. But with the recent Supreme Court decision to dissolve key parts of the Voting Rights Act, coupled with pending legislation in numerous states to suppress voting rights, the struggle for political and economic equality continues today.

“The first March on Washington was indeed a monumental moment in U.S. history and led to significant achievements in civil equality, but the fight is not over. Martin Luther King, Jr.’s dream is not yet fully realized,” said IAM General Vice President Diane Babineaux. “Unfair voting rights restrictions, unemployment, poverty, low wages and poor education still plague many American families, regardless of race. Our pensions, retirement security, and social safety net – Medicare, Medicaid and Social Security – are all under attack.”

“As the beneficiaries of sacrifices made by men and women who came before us, we have a sacred obligation to defend these rights as they come under fresh attacks,” continued Babineaux. “IAM Locals, Districts and Territories are encouraged to join with IAM leaders on August 24 to stand shoulder-to-shoulder in solidarity with our allies in the faith and civil rights communities as we rededicate ourselves to the cause.”

In addition to the march and rally at the Lincoln Memorial on August 24, the week of August 22-28 will feature numerous activities by a coalition of labor, civil rights and religious affiliates, including, The King Center, National Action Network, NAACP, Southern Christian Leadership Council, National Urban League and a week-long National Education Conference hosted by the A. Philip Randolph Institute (APRI).