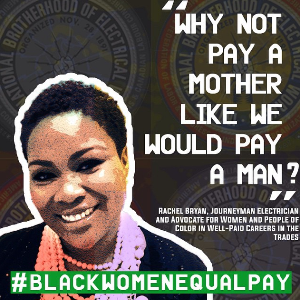 On average, it will take until July 28, 2015 for a black woman to earn as much as a white man would have earned by the end of December last year. That is, for every dollar a white man earns, a black woman earns only 64 cents.

Black Women’s Equal Pay Day is a way to draw attention to this injustice.

As a follow up to the President’s National Equal Pay Day proclamation on April 14, which acknowledged the pay discrepancy between men and women, Atlanta Women for Equality (AWE) wants Americans to recognize July 28 as the date representing the pay discrepancy for black women.

In a social media campaign today, the group wants supporters to post selfies holding a symbolic time card to draw attention to the 208 extra days of work black women must work this year to reach equal pay for last year’s white male’s income. Over the course of a 40-year career, a black woman would typically lose $775,000 to the wage gap.

AWE is a nonprofit organization that works to provide free legal advocacy for low-income women and girls facing discrimination at work or school.