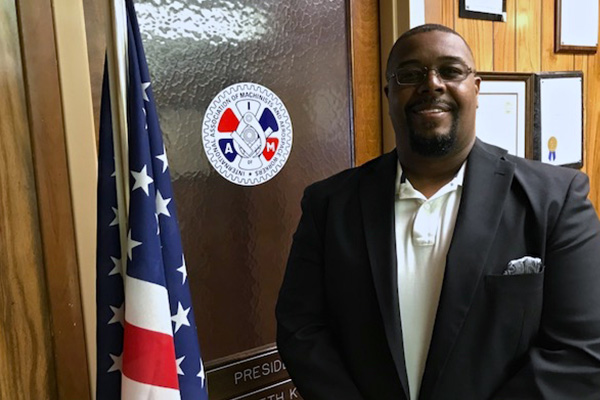 As he does every day, Bruce Mills glanced at his phone this morning to see the daily text from Tamara, his wife of twenty-one years.  The message read, “I believe in you.”

Armed with those words, Bruce Mills will start his day in his new job as the Interim President/DBR of IAM District Lodge 27 after the untimely death of the former DBR Billy Stivers. He knows, firsthand, he has some big shoes to fill.

“I’m excited but also nervous because I want to do great,” said Mills.  “To carry on Billy’s name and be a good successor.”

“Losing Billy was tough, not just for the Machinists Union but for all working people in the South.  But the Southern Territory is enthusiastic to welcome another true unionist to oversee the District,” said IAM Southern Territory General Vice President Mark A. Blondin.  “Bruce Mills’ background shows that he understands that our work is not for ourselves.  It’s to make sure that all the working men and women in the South, and across the country, are given the chance to succeed under a strong, Machinist contract that offers a fair wage, security and a voice on a job.  Just like the bastions of Wall Street, the working people of the U.S.A. deserve a chance at the American Dream.”

Recording Secretary Bob Boehnlein was the one to recommend Mills for the job.  At 80 years old, with more than 4 decades at District Lodge 27, he knows Mills is the right person for the job. “He is a very impressive young man.  He listens, ascertains and responds and those are traits I find lacking in many Union Representatives.  If you have the right person, in the right position, the Membership is a whole lot happier and better taken care of…and that’s why Bruce will be a great DBR.”

In 2007, Mills became an IAM member when he started working for Raytheon in Louisville, KY as an Electronics Mechanic.  One personal grievance fight against management early on in his career was all he needed to spark his desire to do more for his Brothers and Sisters in the shop.  He soon signed on to become a trustee at his local, Lodge 830, which eventually led him to the position of Vice-President and later President of the same local.  He was soon the Vice-President of the District and hungry to learn what more he could do.

“Billy gave me the best advice. He told me it all boils down to motivating people to do their best. And the way to do that is to Just be you,” remembers Mills.

And that’s exactly what he has tried to do throughout his union career and his life.

“My Father was in the military, as well as my brothers and my son.  Working at Raytheon was my way of giving back. I have a passion to contribute,” said Mills.

As a father, husband, church leader and community volunteer, Bruce understands how a guiding hand can change everything.  His way of looking at things is very simple.  Unapologetically, Bruce explains.  “Come to work, do your job and if we have disagreement, we can work it out. It’s about fighting for what’s right for all of us.  I believe in what’s fair for everyone, not just me.”