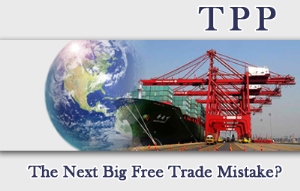 The IAM is joining a coalition of nearly 600 organizations in demanding robust Congressional and public oversight over negotiations for the Trans-Pacific Partnership (TPP), a massive free trade deal that threatens workers’ rights, the environment, food and product safety, internet freedom, patent rights and more.

“The old Fast Track Trade Promotion Authority is simply not appropriate given the subject matter covered by today’s pacts,” writes the coalition in a letter to Senate Finance Chairman Ron Wyden (D-OR).

The TPP currently includes the U.S., Canada and Mexico, as well as notorious human and workers’ rights violators like Vietnam and Brunei. The deal could offshore millions of American jobs, many of them in manufacturing, prompting Global Trade Watch, a non-profit consumer advocacy organization, to call it “NAFTA on steroids.”

The coalition of labor, civil and human rights groups are calling for a “21st century trade authority that includes enhanced mechanisms for Congress to exercise its constitutional authority over U.S. trade policy.”

The proposed new model would get Congress involved earlier, and more often, in trade negotiations. It would allow Congress to set criteria on appropriate U.S. trading partners based on human and labor rights compliance, mandate regular Congressional and public briefings on negotiating progress, and establish a way for a “sizeable minority” in either chamber to get a floor vote to withdraw expedited consideration of any trade deal.

“Only with new trade negotiating authority can we secure new trade rules that can help hard working Americans build a sustainable economy and promote broadly shared prosperity,” said AFL-CIO President Richard Trumka. “Chairman Wyden has a chance to make history by being the architect of a new and democratic trade policy, and we commit to doing all we can to help achieve that goal.”

Tell Congress you want fair trade, not free trade, in the TPP.