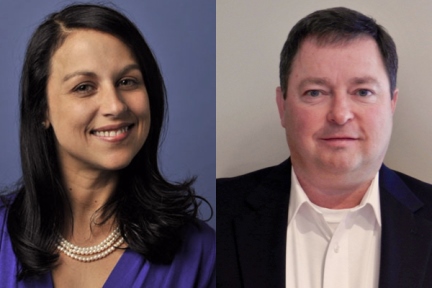 IAM International President Bob Martinez has announced that Deirdre Kaniewski and Tim Wright will be taking positions in the Southern Territory.

Kaniewski, a Communications Specialist and 11-year staff member at IAM Headquarters, will take over communications duties in the 14-state Southern Territory. Wright, a 29-year IAM member and Assistant Directing Business Representative at Tennessee District 711, will become a Special Representative.

“I’m thrilled to be welcoming Deirdre and Tim to our team,” said Southern Territory General Vice President Mark Blondin. “Anyone who’s watched the Machinists News Network knows Deirdre, and we can’t wait to use her skills and energy in the Southern Territory. Tim is an IAM stalwart who has represented our members with vigor—he’ll be a huge asset to us.”

Kaniewski came to the IAM in 2006 from Florida, where she worked as a PBS Reporter/Producer for WFSU-TV/The Florida Channel. Before that, she was employed as a Washington Correspondent for KNOE-TV in Monroe, LA; as a writer and live-shot producer for TV3 in Dublin, Ireland; and as a Field Producer for FOX News in Chicago. Throughout her career, she has also dabbled in the radio and newspaper fields, writing for various papers in the Chicagoland area.  She received her bachelor’s degree from Columbia College Chicago, her master’s degree from the Medill School of Journalism at Northwestern University, and recently completed a social media management certificate at Georgetown University.

Wright initiated into IAM Local 1501 in Tullahoma TN in 1987. He became active in his local as a shop steward, chief steward and was later elected President. Wright served as a delegate to former District 169 and later District 711. He was elected and served as a delegate to the IAM Grand Lodge Convention in 2012 and 2016. Wright was elected Business Representative of District 711 in 2009 and held that position until he was appointed Assistant Directing Business Representative in 2016.