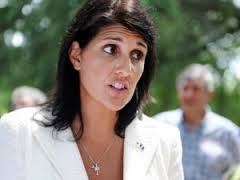 The National Labor Relations Act, the law that governs labor relations at most private companies, makes it the policy of the United States to “encourage the practice and procedure of collective bargaining.” The law, enacted in 1935, guarantees the right to organize into trade unions, engage in collective bargaining and protects workers from being discriminated against because of their union membership.

Haley has taken every opportunity she’s had to trash labor unions.

She has said she wears heels to “kick those unions out” and actively discourages companies with union-represented workforces from coming to South Carolina “because we don’t want to taint the water.” She discouraged Boeing workers in North Charleston, SC from organizing with the IAM in both her State of the State address and in radio ads.

“I don’t know how you compare that to what her legal obligations are to uphold the law,” said Schneider. “It’s hard to put those two together.”

“It’s not a case of the Machinists Union suing Boeing,” said Schneider. “The United States sued Boeing because it was unlawful.”

Haley’s characterization of the IAM as outsiders to South Carolina could not be further from the truth, says Schneider.

“South Carolina Boeing workers came to the Machinists Union, not the other way around,” said Schneider.

The Machinists Union has been in South Carolina much longer than Haley – the IAM’s founder, Tom Talbot, is a native South Carolinian and is buried in Florence – and will remain there long after her governorship.

“Regardless of what the governor says, the IAM will be in South Carolina as long as someone, anyone, wants a union,” said Schneider.