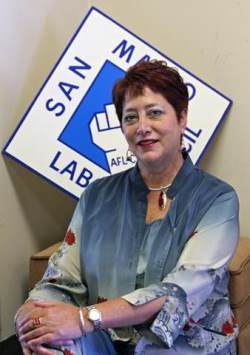 The IAM congratulates 32-year IAM member and Executive Secretary-Treasurer of the San Mateo County Central Labor Council Shelley Kessler on her appointment to the California Commission on Health and Safety and Workers’ Compensation (CHSWC).

The California Speaker of Assembly announced Kessler’s appointment to the CHSWC in a recent statement. The Commission is a joint labor-management body charged with examining the state’s health and safety and workers’ compensation systems and recommending administrative and legislative modifications to improve operations.

“The IAM is honored by the Speaker’s choice of Shelley Kessler to the CHSWC,” said IAM International President Tom Buffenbarger. “Kessler’s unyielding dedication to the working families of California and her community is exemplary. The CHSWC is fortunate to have such a proud advocate for workers’ health and safety as a member of its board.”

Kessler initiated into IAM Local 565 in 1982 when she hired on as a mechanic at Westinghouse Electric – Marine Division in Sunnyvale, CA. Within one year, she was elected Recording Secretary.

Kessler’s experience working on the shop floor compelled her to become involved in worker health and safety issues. She joined the boards of the Santa Clara Center for Occupational Safety and Health, Worksafe, and later the advisory board of the Labor Occupational Health Program at UC Berkeley in order to pursue her concerns for worker protections.

As head of the San Mateo Country Central Labor Council, Kessler represents 110 affiliated local unions and over 70,000 working member families. She has been at the Labor Council for 29 years, first as the political director. She also currently serves as a Vice President of the California State Labor Federation and an IAM Delegate to the AFL-CIO.

Kessler’s union career started in 1977 at General Motors in Fremont, CA where she became the first woman elected to a full-time Union Representative position of the local UAW.