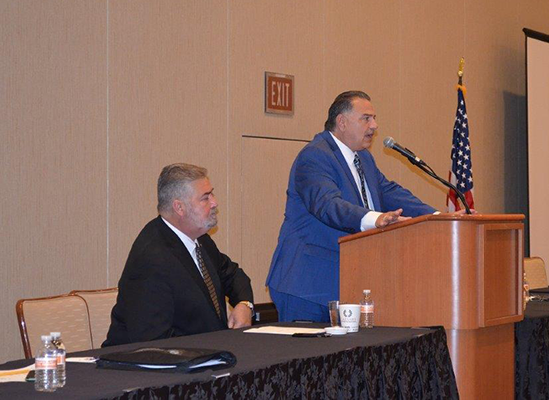 Fighting Machinists up and down the eastern seaboard recently attended the Eastern Territory States Conference. The persistent theme throughout the conference was that “labor matters.”

“The delegates in this room today from across our great territory, volunteer every election to make calls, knock on doors, and ensure our members are informed voters,” said Eastern Territory General Vice President Jimmy Conigliaro Sr. “Each of you know that not only is this election important, but that every election is important.”

“I am so proud to see so many of you getting involved and wanting to learn more about our union,” said IAM International President Bob Martinez. “Your dedication, hard work and unity shape our union from Maine to Michigan.”

“Each of us here understands what is at stake for our members, and their families in just a few short weeks on November sixth,” said Eastern States Conference of Machinists President Mike Vartabedian. “It’s up to each of us as we leave here to go back, and ensure we follow through as we always have to continue to educate our members to not only vote, but to support candidates at every level that stand behind the working middle-class families of this country.”

IAM Grand Lodge Representative Bill Rudis was recognized at the conference for his five decades of service to our great union and to the working families of not just Connecticut, but all of New England. Bill’s IAM story began in 1968 at Local 1746 when he took a job at Pratt and Whitney.