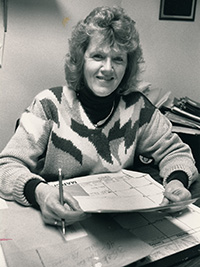 Betty Webber, 80, a champion of Connecticut workers and an inspiration to women activists everywhere, passed away quietly on July 12, 2015, surrounded by her loving family.

She was known throughout Connecticut simply as Betty – the IAM’s first woman Directing Business Representative. Webber did not aim to raise hell – she just worked tirelessly and did what she thought was right, and rode the uproar that followed.

Webber began at Pratt & Whitney as a tool crib attendant. She became involved in organizing, and was both fearless and cagey enough to escape the “internal security” investigations that got many IAM activists fired.

Against the odds, she ran for and won election as a full-time IAM Business Representative, a victory based not only on her feisty leadership, but also on her relentless constituent service.

Soon after her election, Webber was appointed District 91 Assistant Directing Business Representative by then-DBR Charlie Tracy, a long-time ally. In 1982, on the eve of contract negotiations for 15,000 Pratt and Hamilton Standard workers, Tracy had a heart attack and Webber was thrust into the center chair as chief negotiator for Connecticut UTC workers. Negotiations ended in a stalemate.

In 1985, she was elected as the first woman Directing Business Representative in the IAM. That year, she also led the first successful strike against Pratt & Whitney in 25 years. Relations between labor and management at Pratt changed dramatically as a result. In 1988 Webber negotiated an end to the annual common union revocation period, teeing up the eventual establishment of an agency shop clause, and an end to management’s blatant antagonism towards union members.

“Betty Webber was in many ways an ‘accidental’ feminist who stuck to her principles and did not let anyone get in her way,” said Eastern Territory General Vice President Lynn Tucker, Jr. “She was also the unintentional leader of a wave of militant, progressive trade unionism that swept through the Connecticut labor movement, transforming the Connecticut AFL-CIO into a fighting working class organization worthy of its charter.”

“Betty Webber’s impact on the Connecticut labor movement, and our own International Association of Machinists, was profound and indelible,” said International President Tom Buffenbarger. “She truly deserves a spot in our pantheon of legendary leaders and true working class heroes.”