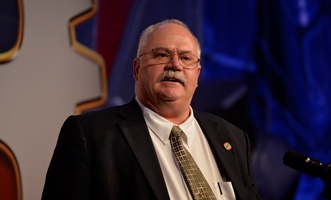 Click here to listen to the program. Barker’s segment begins around 18 and a half minutes into the show.

“We’re trying to drive our organizing efforts down locally to go after anything that’s in our core industries—anybody that’s a supplier in the aerospace industry, anybody that’s a manufacturer in the aerospace industry, air transport or rail,” said Barker. “Just about anything that we represent, we’re really going after those folks who are not currently under collective bargaining. We’re aggressively seeking those targets and we will devote more resources towards that, not only in dollars but in manpower as well.”

Barker discussed some of the challenges the IAM is overcoming in the South, and in particular, at the Boeing assembly plant in South Carolina.

“One of the first things we have to do is educate the workforce, and as amazing as it seems, many people didn’t think there were any unions in South Carolina,” said Barker. “In fact, there are several very active unions down there, including the IAM.”

Barker also talked about the progress made during the Obama administration through rule changes of the National Labor Relations Board (NLRB).

“This administration believes that workers’ rights are human rights and that it should be easier to obtain those rights… Because of the new rules under the NLRB, elections now are on average about 22 to 23 days and that’s down from about 42 days from just a couple of years ago,” said Barker. “Not only the Machinists Union, but I think all of organized labor that go through the NLRB process are updating their programs so they can be more aggressive and get through the election quicker.”