Labor Rallies in Philadelphia for Second Bill of Rights 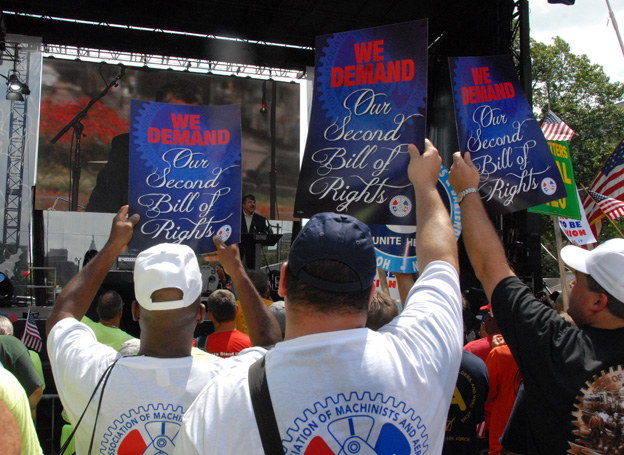 Inspired by the city where the original Bill of Rights was first proposed in 1787, more than 35,000 union members gathered in Philadelphia to endorse a “Second Bill of Rights,” one that includes the right to full employment, a living wage, a voice at work and the right to a secure and healthy future.

of a much larger population, one that includes millions of workers in all 50 states. 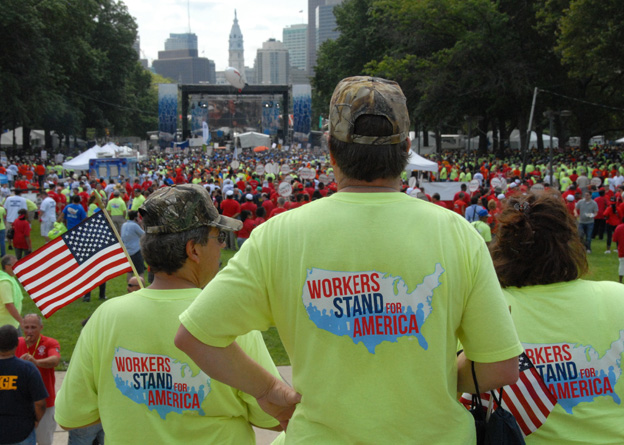 “The need for a guiding statement like the Second Bill of Rights has never been greater,” said IAM President Tom Buffenbarger, who was among the signers and took part in the massive mid-day rally. “Our economy is proof of what happens when economic opportunity becomes limited and large numbers of citizens are denied the right to prosper. As American citizens and as union members, we have both a duty and a right to make these demands for ourselves and for generations to come.”

The rally in Philadelphia marks the first major event of the AFL-CIO Workers Stand for America campaign, which rejects GOP austerity proposals for the vast majority of Americans while corporations and wealthy individuals continue to enjoy unprecedented advantages.

The rally’s message of equal opportunity and economic justice was given added urgency by the announcement that Wisconsin Republican Rep. Paul Ryan was named to be the GOP nominee for Vice President. Ryan was the chief architect of the GOP’s draconian budget proposal that would replace Medicare with a voucher program while making extreme cuts to many established social programs.

Candidates of both political parties, including Democratic incumbent Barack Obama and former Massachusetts Gov. Mitt Romney will be urged to sign and support the Second Bill of Rights.