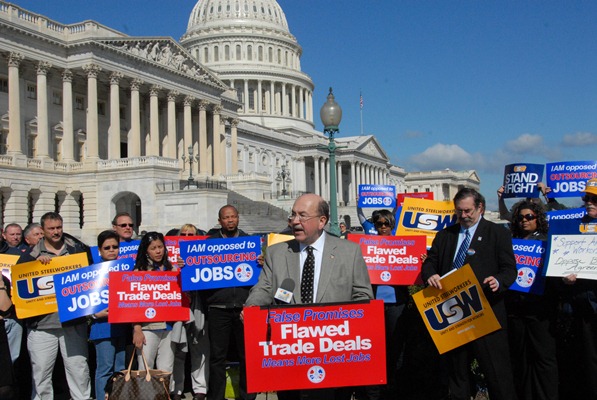 President Obama submitted the three seriously-flawed trade deals to Congress today, clearing the way for hundreds of thousands of U.S. jobs to be shipped overseas – similar to the aftereffects of the 1994 North American Free Trade Agreement (NAFTA).

“It’s time for Congress to reject these failed, NAFTA-style trade agreements that have helped push this country to the edge of an economic abyss,” said IAM International President Tom Buffenbarger at the Washington, D.C. rally. “We’re here today to urge Congress to stop listening to Wall Street and start listening to Main Street.”

Economists estimate that the South Korea FTA, alone, could cost the U.S. 159,000 jobs, like the one lost by IAM Local 873 member Yolanda Pillsbury of Wisconsin. Pillsbury’s job was shipped to China after having worked the job for 25 years.

“We, the working people of America, need to have our voices heard,” said Pillsbury. “We need solidarity and fair trade for all Americans.”

In addition to the cost in jobs, Buffenbarger cited all three trade pacts for failing to include adequate human rights and labor rights provisions, while giving foreign businesses the ability to challenge policies that protect U.S. workers’ health and safety.

“The Colombia Free Trade Agreement carries 2,900 reasons why Congress should oppose it,” declared Buffenbarger. “That’s how many trade unionists were murdered during the past 25 years. Fifty-one last year, 22 this year and 15 after Colombia signed off on a clearly inadequate plan designed to curb the death rate.”

“It’s bad for the economy,” said Rep. Michaud. “They might be fooling some members of Congress, but my constituents don’t want another NAFTA-style trade deal.”