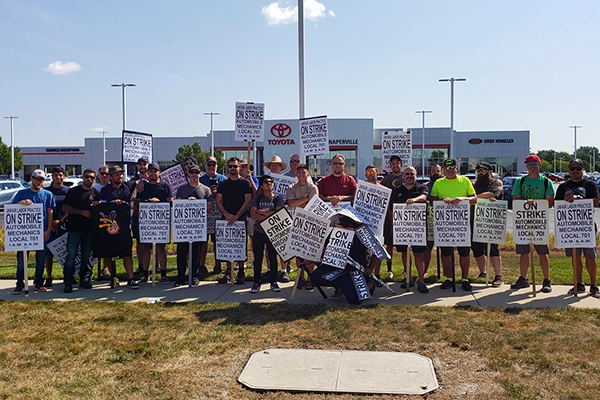 IAM Mechanics Local 701 ratified a final contract with 35 remaining dealerships still beholden to the dealers’ association Sunday. The move comes after the Local already secured an agreement with approximately 120 other dealerships that, over the course of Local 701 strikes this year and in 2017, decided to break away from the NCDC association and bargain with the union directly.

The NCDC bargaining committee originally vowed they would never come to terms with the Union by agreeing to the other dealerships’ agreement. They, instead, made egregious demands. The association proposed making it easier to reduce a Journeyman’s weekly guaranteed base pay, a most favored nation’s clause that completely undermined the collective bargaining process and an unwillingness to pay health insurance rates set by the Health & Welfare Fund’s Board of Trustees. The NCDC’s proposal also failed to support funding into the Local 701 Training Program counterintuitively which puts more qualified technicians into the employment pipeline – something the auto mechanic industry drastically needs.

The association started this contract cycle with 56 dealerships when negotiations began in June, but dwindled to 35 dealers after 21 pulled out and signed interim agreements, further breaking and reducing its own ranks. This year’s pullouts were in addition to the dealerships that broke ranks from the NCDC in 2017.

Eventually, the NCDC Association capitulated and withdrew ALL of its initial proposals. The 35 locations that remained on strike were offered the same deal as the other 120 dealerships with a few minor changes. The measure was marginally passed at the Local 701 ratification meeting.

“This strike was the result of yet another attempt by the few anti-union dealers who remain in the NCDC association from four years ago to break our union,” said IAM Local 701 Directing Business Representative Sam Cicinelli. “I’m extremely proud of the resolve, tenacity and solidarity of the membership. Their unflinching determination led to yet another benchmark agreement across our industry.”

Other bargaining highlights include no increase in insurance copays of $10/week and the employers agreed to pay the required rates for Health & Welfare and Pension.  They also agreed to increase funding into Local 701’s Training Program which attracts new technicians and properly trains them.

“IAM Local 701 mechanics fought for what they deserved, a fair contract recognizing their high skills and devotion to their craft,” said IAM Midwest Territory General Vice President Steve Galloway. “Although we always use strikes as last resorts, the Local 701 Mechanics showed how powerful this tool can be to get employers to do the right thing—negotiate in the best interest of the workers, the customers and the dealership’s business. I couldn’t be more proud of their hard work and dedication.”

Local 701 striking members received public and union support throughout the strike, including donations of non-perishable food from fellow IAM automotive Local 777 in St. Louis. Local 701 would like to thank everyone that assisted in this historical victory for their membership and our great Union.