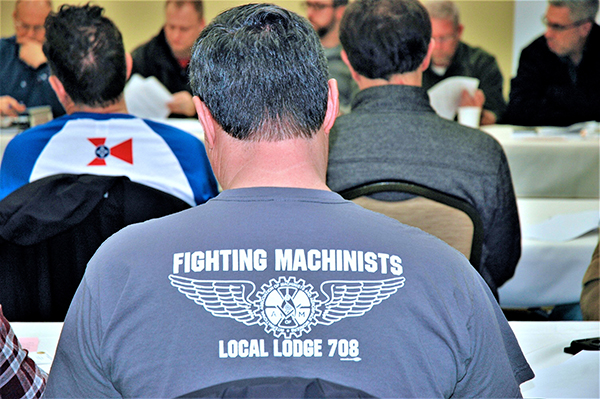 After being presented with a last, best and final offer from FlightSafety Services Corporation (FSSC), the machinists who train pilots and maintain flight simulators for the new KC-46 at McConnell AFB in Kansas have voted to strike. The membership voted 100% to take such action.

“The machinists on strike at local lodge 708 in Kansas have the full support of the IAMAW,” said Southern Territory General Vice President Rickey Wallace. “These IAM members deserve to be paid fairly for a job that exceeds expectations in helping to provide for the U.S. Military. It is a shame that we have to go out on strike to get these hard-working men and women what they deserve.”

The main reason the offer was quickly rejected by the membership was the omission of language that would designate this group as part of the Service Contract Act or SCA, a government rule which requires contractors and subcontractors to pay area wages and benefits that are determined by the government. Without such a designation, the IAM members at MCConnell AFB, who take care of the men and women that fight for this Country, are paid less than their counterparts working in the same industry. The bottom line – right now these diligent and tireless machinists are being paid less than the minimum standard set by the federal government. 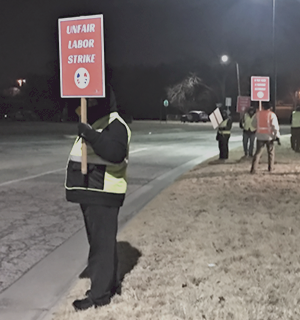 “We need to have the same protection that the Service Contract Act offers to the more than 300 other companies doing the same or similar work for the government,” said Directing Business Representative of District Lodge 70 Cornell Beard. “It’s inconceivable to me that the government has tied the hands of FSSC in negotiating fair and equitable wages for these men and women who have spent their careers providing for our airmen. They took care of our U.S. Military, it’s time now to take care of them.”

Although it was ultimately the decision of the U.S. Air Force contracts office to not include this designation of SCA for this government contract, but rather let it fall to the Department of Labor, labor representatives in Wichita believe the company has an opportunity to do right by these working Americans.

Tyson Kelly, District 70 Business Representative and part of the negotiation team, believes this tight group of 17 bargaining unit members are entitled to the respect they give day in and day out to our U.S. Armed Forces.

“Our members provide the best training available to the men and women in uniform. They should be able to provide for their families with their paychecks and not have to constantly worry about their futures being in jeopardy or at stake. There’s something fundamentally wrong with that scenario,” said Kelly.

Aerospace coordinator Tony Blevins agrees. “After FSSC took over this contract, our members have spent more than a year working at an average of 45% below the wages and benefits of their counterparts. Government jargon and restrictions aside, there’s something terribly wrong with that equation. It is our job as labor representatives to help rectify this situation now, so that it doesn’t become the norm in the future.”