Locked-Out Members at Triumph to Vote on New Contract 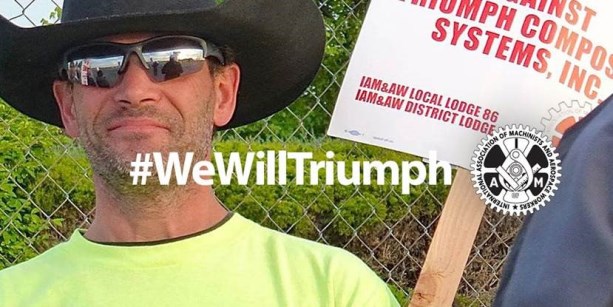 IAM District 751 negotiators and Triumph Composite Systems have reached a tentative agreement that could end the five-week-long labor dispute at the Spokane, WA aerospace manufacturing plant.

Union members who work at the plant will vote on the proposed four-year agreement on Wednesday.

The two sides came to the tentative agreement after three days of talks with a federal mediator.

Details of the proposed agreement are not being released publicly until all union members have been briefed. But District 751 President Jon Holden, who led the union’s negotiating team, said the draft language “goes a long way toward addressing the issues that prompted 94 percent of our members to reject the previous contact offer.”

District 751 represents 403 hourly workers at the plant. The workers voted overwhelmingly on May 9 to reject Triumph’s contract offer, and to authorize a strike starting May 11. Before the strike could begin, however, Triumph management sent workers home without pay on May 10, starting a lockout.

The Triumph workers are specialists in fabricating composite components for aircraft interiors, including floor panels and ducts for environmental control systems. They produce more than 10,000 environmental control system, flight deck and composite interiors assemblies and 9,000 floor panel assemblies each month, which are used in airliners built by Boeing, Airbus and Bombardier.