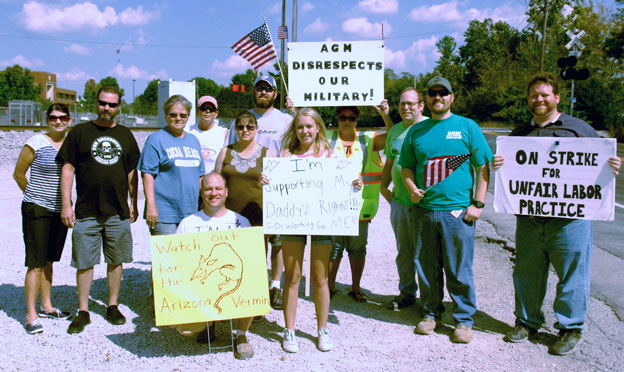 IAM members employed by Allsource Global Management (AGM) at the Bluegrass Station Army Depot in Lexington, KY are on strike after the company refused to bargain in good faith.

IAM members employed by Allsource Global Management (AGM) at the Bluegrass Station Army Depot in Lexington, KY voted overwhelmingly to strike after the company refused to bargain in good faith over sweeping pay cuts it proposed for the workforce of nearly 170 employees.

AGM is a subcontractor to Lockheed Martin, which provides supplies for U.S. Army Special Forces units.

“AGM triggered this strike when it proposed pay cuts of 35 to 50 percent for employees and then refused to bargain in good faith with the elected IAM representatives as required by law,” said IAM Southern Territory Communications Representative Bob Wood.

The company claimed they were forced by the government to re-classify the civilian contractors, which would result in the pay cuts. Despite repeated requests, AGM refused to provide documentation to support their claims.

“Our members are proud of the job they do at Bluegrass Station to support our armed forces,” said Wood. “But we have to protect our jobs, and we fully expected AGM to come to the table and negotiate in good faith. We did not expect AGM to stonewall the negotiations and hide behind anti-union attorneys who refused to bargain.”