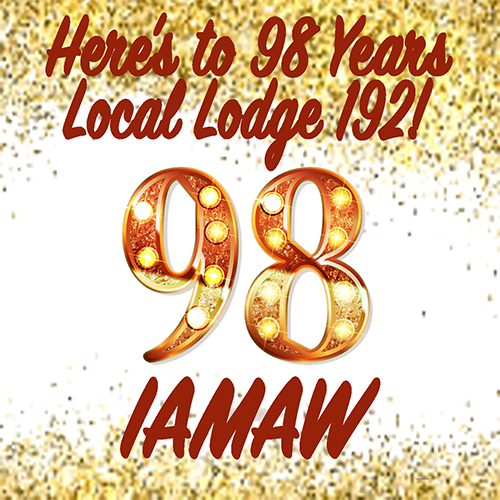 She looks really good for 98 years old! That’s how many years IAMAW Local Lodge 192 in Pensacola, FL has as of May 14, 2018. With a charter drafted on April 5, 1920 and signed in May of that same year, this is one of the oldest local lodges in the Machinists Union.

“For nearly a century at this lodge, the Machinists have been taking care of workers in what we today refer to as District 75, which covers most of the state of Alabama and parts of the Sunshine State.  That’s definitely something to be proud of,” said GVP Mark A. Blondin. “It’s a mark of excellence that we have had our footprint in the South since the inception of the IAMAW. Our skill in taking care of Workers and their families reverberates throughout this part of the U.S.A. and Local Lodge 192 is a great example. They take care of U.S. Navy Government Employees working at NAS Pensacola & Whiting Field and we are elated to acknowledge and celebrate their 98 years.”