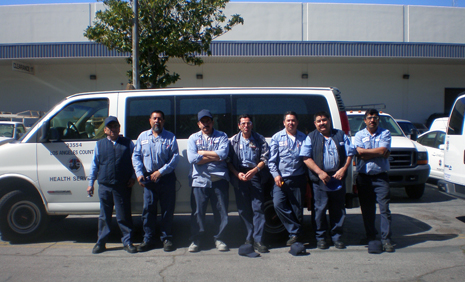 iMail – 3/18/2008 – Workers employed by Johnson Controls who maintain and service the vehicles for the Los Angeles County fleet services are the latest to say “yes” to IAM membership. These 42 new members are the mechanics who keep the fleet of automobiles, trucks and tractors moving.

A main concern for the workers was job security and a successor clause. Should the company lose the contract with the county, the mechanics wanted an IAM contract to ensure that their wages and benefits would still be in force with a new contractor.

One of the big challenges in the campaign was the logistics of the site locations, which number six in all and range from 20 to over 100 miles apart from each other. But logistics wasn’t the only obstacle.

“The company had their union buster moving from site to site holding meetings with the employees to create doubt and confusion in the work force,” said Organizing Department GLR Macario Camorlinga, who headed up the campaign. “They gave it their best effort, but the vote was in favor of the IAM 20 to 19.”

Having just voted on their Negotiating Committee members, mechanics at Johnson Controls are now looking forward to getting their first contract.

“Communication won the day in this campaign,” said Headquarters GVP Rich Michalski. “Our organizing team held meetings in Spanish and English so the workers would be comfortable in understanding exactly what was being explained to them. It was great teamwork by GLR Camorlinga, Apprentice Organizer Larry Olinger and District 947 Organizer Felix Osuna.”