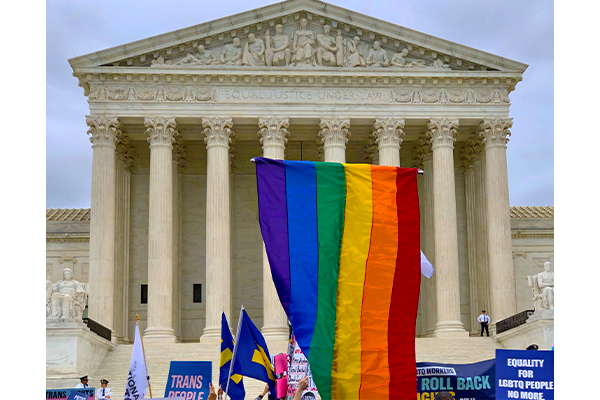 The IAM is lauding a landmark U.S. Supreme Court decision extending civil rights protections to gay, lesbian and transgender people in the workplace. The high court ruled in a 6-3 vote that firing someone for being LGBTQ is a violation of the sex discrimination prohibition of Title VII of the 1964 Civil Rights Act.

“This long overdue decision says what our union and our allies have always said—that no one should be fired for who they are,” said IAM International President Robert Martinez Jr. “While we celebrate the significance of this moment, we also recommit ourselves to fighting for dignity and justice on the job for every worker.”

LGBTQ+ workers have finally won the basic right to not be fired for who they are.

The @MachinistsUnion stands with every activist who made today’s #SCOTUS ruling possible. We will never tolerate any form of discrimination—on or off the job. https://t.co/NzJyTvQaaH

The ruling sets a national standard for LBTGQ workplace rights. Prior to the ruling, it was legal to fire workers based on sexual orientation or gender identity in 27 of the nation’s 50 states.

The IAM joins many other labor unions and employee rights advocates to applaud the Supreme Court’s ruling. That includes Pride at Work, an AFL-CIO constituency group that advocates for LGBTQ employment rights.

“Today, the Court recognized that discrimination based on someone’s sexual orientation or gender identity is rooted in sex discrimination,” the association’s executive director Jerame Davis said in a June 15 statement. “The approximately 11.5 million LGBTQ people and 1.5 million transgender people in the United States are now protected from discrimination in workplaces across the country. While many lower courts already have recognized that, we now have clarity from the highest court in the land.”

“This ruling was long overdue, and it is my hope that this outcome will also have an impact on other laws, thus eradicating discrimination on the basis of sex, from our nation’s education system, housing programs, as well as allowing for equal pay opportunities, and access to healthcare,” said Yanira Merino, LCLAA National President.