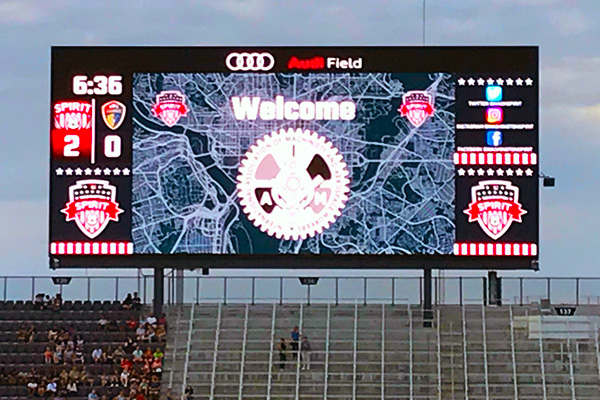 The IAM was among a number of labor unions honored during the Washington Spirit’s recent “Salute to Labor” night at Audi Field.

The July 10 event was a nod to the region’s workers, including those who helped construct the 20,000-seat sports venue that was completed in July 2018. The $400 million stadium in Buzzard Point was a construction project with workers such as carpenters, painters and ironworkers.

The evening’s match between Spirit and the North Carolina Courage also included posting of union logos on the scoreboard, including that of the IAM.

The Spirit thanked many unions in the D.C. metro region, which includes the IAM, the Transportation Communications Union (TCU/IAM) and the National Federation of Federal Employees (NFFE-IAM).

The Spirit’s website touted the work of the those who constructed Audi Field, which also included apprenticeship opportunities for local residents:

Over the 18 months that it took to build the stadium, many different hands were needed to pull this project together. Not only was it a good learning experience for many, but through the project labor agreement, it has turned into long-term jobs for local residents of the Washington, D.C. area.