Machinists Endorse Medicare for All 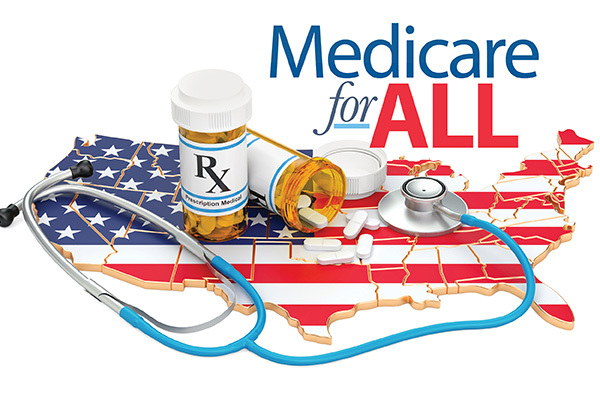 The IAM recently joined House sponsors of the Medicare for All Act of 2019 at a Capitol Hill press conference. This legislation, sponsored by U.S. Reps. Pramila Jayapal (D-WA), Debbie Dingell (D-MI) and more than 100 other members of Congress, will provide every American with comprehensive health care.

It’s time to put health over profits. It’s time to guarantee health care as a human right. It’s time for #MedicareforAll. Join me LIVE as we launch the Medicare for All Act and usher in a new wave of universal health care! Follow LIVE: https://t.co/iMcGpz2mCO pic.twitter.com/sm0m8TkQVW

For decades the IAM has strongly supported a single-payer, universal healthcare system as the best, most efficient way to ensure access to healthcare for all Americans. While the Affordable Care Act has been successful in providing access to millions of previously uninsured Americans, an estimated 29 million people in this country remain without health insurance.

TAKE ACTION: Fill out our online form asking your Representative to support the Medicare for All Act of 2019

“The exorbitant cost of healthcare in the United States also creates major challenges for our Machinists Union members at the collective bargaining table,” said Machinists Union International President Robert Martinez Jr. “At nearly every negotiation we enter, the company informs our members that the burden of rising healthcare costs is eating up a larger and larger portion of our total compensation. These companies claim that they can no longer afford to make substantial improvements in wages, retirement, and other benefits due to the magnitude of healthcare cost increases. Instead, they are shifting these rising healthcare costs on to our members in the form of higher employee share of premiums, deductibles, and other out of pocket costs; putting countless families just one medical emergency away from serious financial hardship.”

READ: IAM letter supporting the Medicare for All Act (HR 1384)

Our current health care system makes no sense for working people. It is time for #MedicareforAll. pic.twitter.com/0n8DeNd5iv