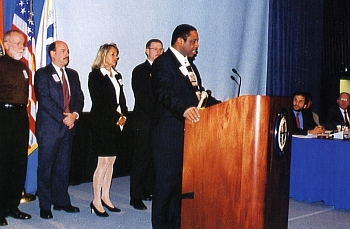 For more than a decade, the IAM has fought for better working conditions for Flight Attendants. Above, IAM Transportation GVP Robert Roach, Jr. testifies with IAM Flight Attendants and safety coordinators at a FAA hearing in 2000 in favor of extending OSHA protections to air cabin crews.

“For more than 40 years, American workers have enjoyed the benefits and protections afforded by the Occupational Safety and Health Act,” said Buffenbarger in a letter to all Senators. “Unfortunately, these protections do not apply to Flight Attendants.”

Since 1975, the Federal Aviation Administration has held unilateral jurisdiction over workplace safety for Flight Attendants, but without prescribing or enforcing safety and health standards or regulations. Sen. Paul is proposing an amendment to strike language from the pending FAA Reauthorization Bill (S.223) that would create shared jurisdiction over air cabin workplace safety for both OSHA and the FAA.