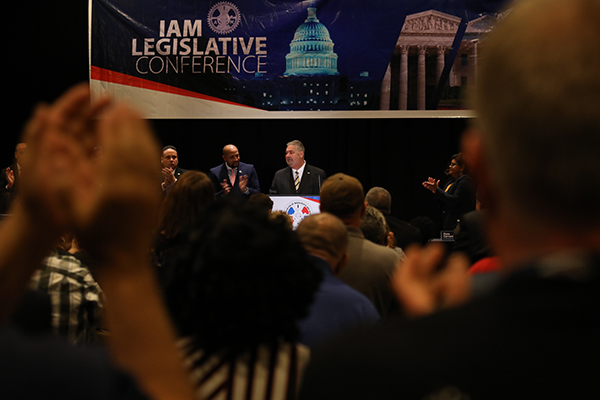 Hundreds of IAM members from across the country are advocating for all working people in Washington, DC this week at the 2019 IAM Legislative Conference.

“We want everyone on Capitol Hill to hear a simple message from 600,000 Fighting Machinists: ‘You’re either with us or you’re against us,’” IAM International President Robert Martinez Jr. told more than 300 delegates in his keynote address. “It is your activism here in Washington, DC and back home that has the power to change the rules back toward working people.”

With the 2020 campaign season already in full swing, Martinez formally announced a member-driven process for the IAM’s 2020 U.S. presidential endorsement. Members in good standing can now register to vote in the IAM’s endorsement election at IAM2020.org.

READ: You Now Have a Voice in the IAM’s U.S. Presidential Endorsement

“The candidates are already reaching out to me asking for the IAM’s endorsement,” said Martinez. “I’m telling them to go talk directly to our membership at their locals, districts, state councils and conferences because they will be making our endorsement decision.”

“I have always said, ‘If you’re not at the table, you’re on the menu,’” said Solomon. “Your presence here this week sends a clear message that the Machinists are engaged and holding our elected officials accountable every day of the year.”

This week is the 2019 IAM Legislative Conference. Follow along with #IAMLegConf19 as we hear from allies on Capitol Hill and go out in force to lobby on issues that matter to working families. pic.twitter.com/RZkrWpW1Ih

Super pumped for the IAM Legislative Conference! Get to hear of all the things Union Brothers and Sisters have been up to, get some ideas and network, too! #IAMstrong #unionstrong pic.twitter.com/Sx5Qp147GZ

IAM Legislative Director Hasan Solomon kicks off #IAMLegConf19 by reminding us off the importance of making our voice heard on Capitol Hill. We’ll be 400 members strong in DC this week! pic.twitter.com/l0jHqB0Y7m

Today the IAM is proud to announce that our members will drive our 2020 presidential endorsement process, beginning with a membership vote. #IAMLegConf19 https://t.co/bQUFLGCRfu

“Corporations are suppressing wages so they can increase profits. They have somehow twisted the idea of the American dream. This is why we fight.”

“We need a #NAFTA agreement with tough, enforceable labor protections. Nothing else is acceptable.”

“Organized labor is the one organization that is bringing people together, regardless of what they look like, where they’re from or who they worship.”

Together with @TCUnionHQ, we are the fiercest advocates for Amtrak. We must stop politicians from continuing to gut our nation’s passenger rail network and outsourcing good union jobs. #IAMLegConf19 pic.twitter.com/gdwpfnmjvn

Federal employees endured a senseless 35-day, politically-driven government shutdown. It took the entire labor movement standing in solidarity to end it and get back pay for federal employees. Proud to work with our partners at @NFFE_Union. #IAMLegConf19 pic.twitter.com/RI4vFnCDRl

Our gains in wages are being negated by rising healthcare costs. It’s not sustainable. The time is NOW for universal health care. Proud to stand with our allies at @LaborforSPayer. #IAMLegConf19 pic.twitter.com/F0LiJfRxwW