Machinists’ Part of the First Moon Walk, and Beyond 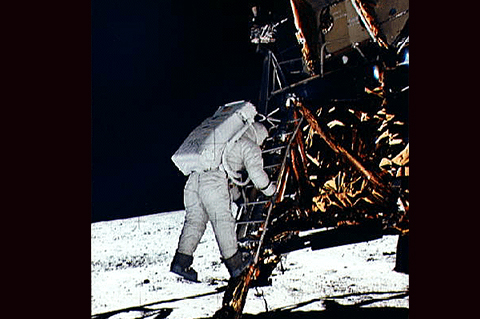 In addition to Aldrin, many other IAM members in Florida and Texas were involved throughout the mission and the weeks-long quarantine process when the astronauts returned to Earth.

The July 20 lunar landing was the achievement of a goal set eight years earlier by President John F. Kennedy, who challenged the nation to place a man on the moon before the end of the decade.

The 240,000-mile Apollo flight to the moon started with the July 16, 1969 takeoff of a Saturn V rocket from NASA’s Kennedy Space Center. That included the work of about 1,500 IAM space mechanics, and members of nine IAM locals in Florida.

The IAM’s part in NASA’s history lives on today with some of Kennedy’s words hanging at the IAM’s Cape Canaveral Union Hall.

“Our nation is depending on everyone engaged in the space and missile programs to do all within their power to assure that work proceeds vigorously, economically and without delay,” Kennedy wrote then.

The Apollo 11 splashing down in the northern Pacific Ocean on July 24, 1969 didn’t stop the IAM’s involvement in the mission.

The quarantine and decontamination process started work for some 120 members of IAM Local 1786 in Houston, Texas. They were stationed at the Lunar Receiving Laboratory at NASA’s Houston Center.

The IAM members were tasked with duties such as maintaining the filtration, air conditioning, monitoring and vacuum equipment in the three-story facility.