Machinists Reengage on Fight for Federal Contract Worker Back Pay 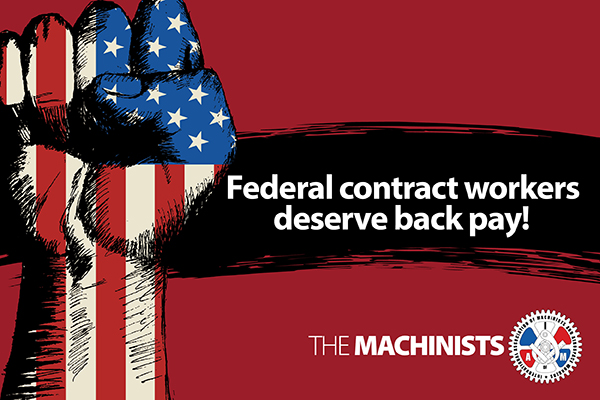 After GOP Senators blocked inclusion of federal contractor back pay in the funding bill that ended the shutdown, the IAM is again leading the charge to pursue another strategy. A group of 47 members of Congress, led by Reps. Elijah Cummings (D-MD) and Gerald Connolly (D-VA) and Del. Eleanor Holmes Norton (D-DC), are calling on the House Appropriations Committee to include a provision to provide back pay to employees of federal contractors who lost wages during the government shutdown.

“Employees of federal contractors and their families should not be penalized for a government shutdown that they did nothing to create,” wrote the group. “… While federal employees received back pay at the end of the shutdown, federal contractors did not.”

“Approximately a million federal contract workers were furloughed or forced to work without pay during this recent, record-breaking, 39-day shutdown,” said the council.  “These men and women work side-by-side with federal workers performing jobs that are absolutely vital to the government and to the people of the United States. Too many of these federal contract workers and their families, the impact of this pointless shutdown has been crippling.”

The IAM continues to support the bipartisan Fairness for Federal Contractors Act of 2019, introduced by U.S. Reps. Donald Norcross (D-NJ) and Chris Smith (R-NJ), which would provide federal contractors with back pay after the longest government shutdown in U.S. history. The legislation would instruct federal agencies to work with federal contractors to ensure that up to $1,400 of back pay is granted to all impacted contract workers.

CALL NOW: Tell your Representative to support the Fairness for Federal Contractors Act!