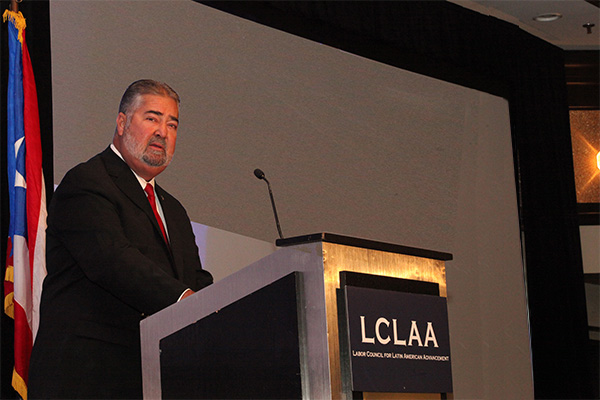 Without sufficient assistance from the federal government, Puerto Rico has been slow to recover from the devastation of Hurricane Maria, which slammed into the U.S. territory in September 2017. Most of the island was without power and clean water for months. The Puerto Rican government recently raised Maria’s official death toll to nearly 3,000.

A large part of the efforts were carried out by Machinists Union Business Representative José “Lole” Rodríguez-Báez, who also serves as president of the Puerto Rico Federation of Labor. Rodríguez-Báez’s lifetime of service to working people was recognized by receiving LCLAA’s Montemayor Barraza Award.

“The workers of Puerto Rico, the people of Puerto Rico are not alone, they can count on the power of workers in the United States,” said Rodríguez-Báez.

IAM members also gave back by cleaning and painting a public school that is being transformed into a women’s shelter.

“I am very proud of our work here today,” said Jose Perez, a member of Puerto Rico Local 2725. “I am a proud member of LCLAA and I am equally proud to be an IAM member. When you see the efforts and the work being done today, it makes being a member very much worthwhile.”

WATCH: Service to the Community in Puerto Rico

“We’re here to help out,” said George Mejia, Recording Secretary for Chicago Local 701. “It’s just an amazing feeling to give back.”

For more information and to join LCLAA, visit lclaa.org.

Working together to help others is what unions do best. ✊🏽💪🏽👍🏽 #LCLAA18 pic.twitter.com/u4w0KtGJxI