Machinists Stand Up for Worker Freedom 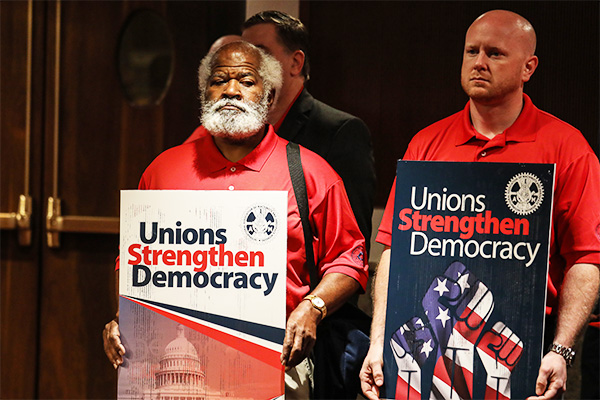 “The Workplace Democracy Act will restore the right of every American to join together in union—whether you live in Vermont, Wisconsin, North Carolina or Texas,” said Machinists Union International President Robert Martinez Jr. “Unions strengthen democracy. Unions mean freedom and a better life for our families… for our children’s families!”

“We must demand freedom in the workplace for all workers!”

“We must no longer tolerate CEOs and managers who intimidate, threaten or fire pro-union workers, who threaten to move plants to China if their workers vote in favor of a union, and who refuse to negotiate a first contract with workers who have voted to join unions,” U.S. Senator Bernie Sanders said. “If we are serious about reducing income and wealth inequality and rebuilding the middle class, we have got to substantially increase the number of union jobs in this country.”

“Republicans like President Trump and Governor Walker continue to crack down on unions and push a special interest, corporate-driven agenda that makes it harder for middle-class families to get ahead. And while they stack the deck against the American worker, unions are fighting to expand economic opportunity and strengthen the middle class,” said U.S. Representative Mark Pocan, a member of the International Union of Painters and Allied Trades. “The Workplace Democracy Act restores real bargaining rights to workers and repeals the right to work laws like those that Governor Walker has used to undercut American workers. I’m proud to introduce this legislation with Senator Sanders and stand up for the millions of middle-class families who are under attack by Republican leaders.”