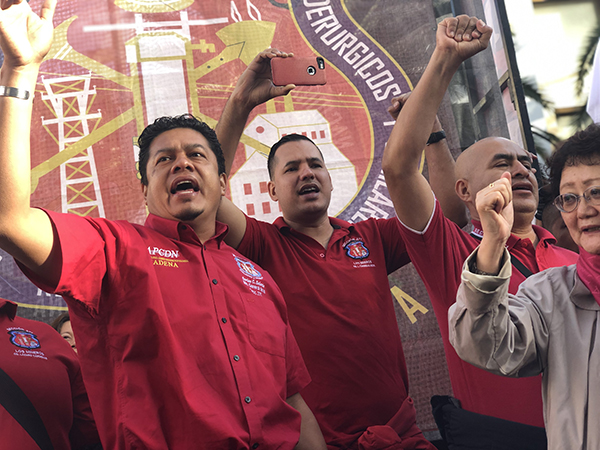 The Machinists Union joined democratic unions from around the globe in calling for an end of sham “protection” contracts and violence against union activists that have held Mexican workers down for generations.

“There is a human and labor rights crisis in Mexico. Working people there are routinely stigmatized and brutalized for daring to speak up for a better life,” said IAM International President Robert Martinez Jr. “The IAM continues to demand that every Mexican worker have access to a free, independent and democratic union. We hope this new government will keep its promise and usher in a new era of long-awaited freedom south of the border.”

The IAM, along with 200 union leaders from around the world, congratulated the president of Los Mineros and IndustriALL Executive Committee member, Napoleón Gómez Urrutia, on his return to Mexico after 12 years in exile. Napoleón is now a senator in the new Mexican government.

Delegates approved a campaign to call on Mexico’s new progressive government to stop company-led protection contracts, which silence working people. The IAM and IndustriALL recently heralded a big step toward Mexican union democracy, the formation of the Federation of Independent Automotive, Auto Parts, Aerospace and Tire Unions in Mexico.

“We are going to vindicate labor and human rights in #Mexico 🇲🇽.”

Napoleón Gómez Urrutia, Los Mineros president and newly-elected senator in Mexico, is back in his home country after 12 years in exile.

We are in Mexico City to show international support and solidarity with Mexican workers. We must put an end to protection unions! #ALLSolidarity pic.twitter.com/iFMlsTcI6i