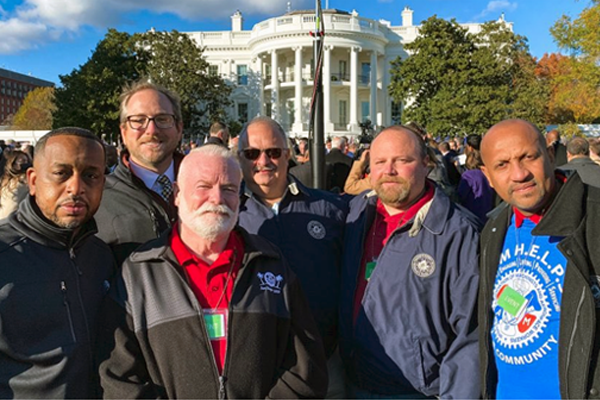 The IAM applauds the much-needed trillion-dollar new federal investment in the nation’s infrastructure. The bipartisan legislation that was signed into law will create good, union-paying jobs to help repair the nation’s crumbling highways, bridges, and also mark the most significant federal investment in public transit and passenger rail since the creation of Amtrak.

President Joe Biden on Monday, Nov. 15 formally signed the Infrastructure Investment and Jobs Act (H.R. 3684) into law. Biden was joined at the White House by several key stakeholders, including a large delegation of IAM members.

The signing of the bipartisan infrastructure bill yesterday was a historic moment for our country and our union as the bill makes massive investments in our crafts. We were proud and honored to attend the bill signing ceremony. #1u #InfrastructureBill #InfrastructureWeek pic.twitter.com/06GrVrourL

“We applaud the signing of this very critical trillion-dollar piece of legislation into law, paving the way for much-needed improvements to several of our nation’s economic drivers,” said IAM International President Robert Martinez Jr. “This law will provide historic investments for the airline, transit, aerospace, manufacturing and other critical industries. This law also strengthens Buy America rules to help boost our domestic manufacturing sectors.”

The IAM was a strong advocate for the trillion-dollar legislation, which helps reverse the backlog of thousands of buses and rail cars for public transit agencies and critical improvements to transit stations and thousands of miles of track and power systems.

This doesn’t end the push for improvements to the nation’s infrastructure. The IAM is also lobbying aggressively for passage of Biden’s Build Back Better legislation.

Some highlights in the new infrastructure law:

Today, President Biden signed the Bipartisan Infrastructure Deal into law. This is a historic investment that will grow the economy, enhance our competitiveness, create good-paying, union jobs, and make our economy more sustainable, resilient, and just. pic.twitter.com/WKowbudFYF