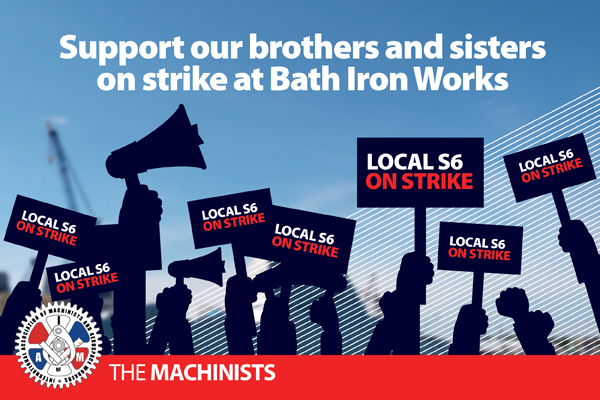 WASHINGTON, July 14, 2020 – The International Association of Machinists and Aerospace Workers (IAM) is calling on members of Congress to pressure U.S. Navy shipbuilder Bath Iron Works (BIW), a subsidiary of General Dynamics, to negotiate a fair contract agreement with 4,300 IAM Local S6 shipbuilders entering the fourth week of a strike in Maine.

IAM members began the strike on June 22 after overwhelmingly turning down a contract that would have allowed the company to greatly expand its use of low-wage, out-of-state contractors, without any recourse for the union. The expired shipyard contract allowed for subcontracting after a joint review period by the union and company. BIW is now seeking a blank check to subcontract additional work with no input from union workers.

“The Machinists Union is ready and willing to work with all partners in our effort to save these vitally important jobs and ensure that the necessary skilled workforce is available to continue to build the world’s greatest ships for the U.S. Navy,” wrote IAM International President Robert Martinez Jr. in a July 14 letter to Congress. “We ask that you start by sending a strong reminder to the company of its commitment to these workers, U.S. taxpayers, and our men and women in uniform who rely on world-class ships built by world-class shipbuilders.”

In defense of its pursuit of expanding subcontracting, BIW has insisted it cannot attract an adequate number of new workers but refuses to offer sufficient entry-level wages. The company used to hire a majority of its workers at approximately $24 an hour, but a vast majority of new hires now make $17 an hour. The IAM has offered other workable options to increase its workforce, such as increasing the percentage of overtime worked, which the company has utilized at decreasing levels.

“For generations, Machinists Union members at BIW have worked tirelessly to produce the finest ships the world has ever seen,” wrote Martinez. “In these uncertain times, General Dynamics should be doing everything in their power to support this vital mission. Instead, the company has presented these workers with a slap in the face; proposing to subcontract much of their work to out-of-state contractors and jeopardize our members’ safety, health, and livelihoods.”

While management pursues workforce concessions, General Dynamics has made $15.3 billion in gross profits since 2018 and bought back more than $2.4 billion worth of its stock.

BIW has attempted to break the strike by calling in temporary workers to build U.S. Navy ships and ended health insurance for 4,300 IAM Local S6 families in the midst of a pandemic.

The International Association of Machinists and Aerospace Workers (IAM) is among the largest industrial trade unions in North America and represents nearly 600,000 active and retired members in the manufacturing, aerospace, defense, airlines, transportation, shipbuilding, woodworking, health care, and other industries. For more information, visit goIAM.org.