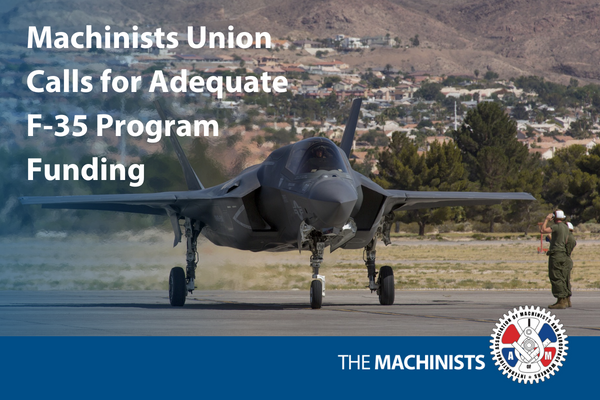 For 16 years, the F-35 Lightning II program has played a critical role the American economy and national defense with nearly 300,000 total jobs supported across the F-35 supply chain nationwide, including thousands of Machinists Union jobs at Lockheed Martin.

“Machinists Union members working on the F-35 program across the country are the best in the world at what they do. With their finely tuned skills and expertise, they build the most advanced fighter aircraft the world has ever known,” said IAM International President Robert Martinez Jr. in a letter to the White House. “As a nation, we must continue to invest in this program in order to stabilize the production line, support this indispensable workforce, shore up the supply chain and bolster our national defense industrial base.”

The IAM is the largest aerospace and defense union in the United States and has advocated consistently for adequate funding of the F-35 Lightning II program in the Fiscal Year (FY) 2023 defense budget.

In response to disappointing news that only 61 F-35 aircraft have been requested in the FY23 proposed budget, a 30% reduction in funding, IAM International President Martinez sent a letter to the White House demanding that the government fully fund the F-35 program in the best interest of national defense and American workers.

“The Machinists Union and our members are committed to the F-35 program and to the men and women in uniform who rely on this peerless aircraft; however, our members cannot adequately support the program without funding for a minimum of 86 F-35 aircraft a year for our U.S. Services,” wrote Martinez. “This minimum number of aircraft is absolutely necessary to keep our workforce intact and our production lines firing on all cylinders.”

The IAM is asking the U.S. government to support the highly skilled union workforce behind the infamous F-35 by investing in nation’s largest defense program, strengthening the U.S. economy, workforce and national security all at the same time.