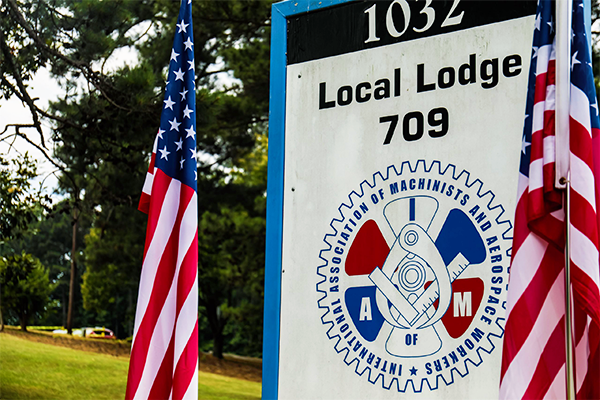 WASHINGTON, Oct. 21, 2021 –  The International Association of Machinists and Aerospace Workers (IAM) and the Georgia Democratic congressional delegation, led by U.S. Rep. Nikema Williams (D-Ga.), are working to help firefighters and facility safety technicians at Lockheed Martin in Marietta, GA, fight to save their jobs.

Lockheed Martin recently announced that it plans to outsource fire protection at the Marietta facility. The 41 firefighters and three safety technicians are members of the IAM Local 709. The majority are U.S. military veterans and have provided fire protection for the facility since 1961.

“The firefighters and safety technicians in the Lockheed Martin Fire Department are essential workers and we hope to save the jobs of these faithful first responders,” said IAM Southern General Vice President Rickey Wallace. “They risk their lives every day to keep the facility and the personnel inside safe from harm. The thousands of IAM members inside the facility will stand in solidarity with our impacted members. Outsourcing should be the last thing on Lockheed Martin’s agenda. The company should focus on putting out great products that help keep our nation safe and relying on experienced personnel to keep the workers safe. We will commit our full resources to fight back this outrageous outsourcing scheme. I applaud Congresswoman Williams and other members of the Georgia congressional delegation for sticking by our members during this difficult fight.”

Rep. Williams is leading the Georgia Democratic congressional delegation in an effort to protect union workers at the Lockheed Martin Aeronautics facility in Marietta.

“The Lockheed Martin Marietta facility employs over 5,000 Georgians working across a 900-acre campus with myriad buildings, entryways, and corridors,” the letter reads. “As firefighters, first responders, and EMTs, the Marietta Fire Safety Department has decades of training and experience protecting the safety and health of the workforce, as well as the government funded assets, located on this large and complex campus. These workers have the institutional knowledge of this campus that is necessary to best protect their colleagues. We are concerned by the risks that could come with replacing this highly trained and experienced safety team with outside contractors with little knowledge of the facility.”

Click here to read the full text of the letter.