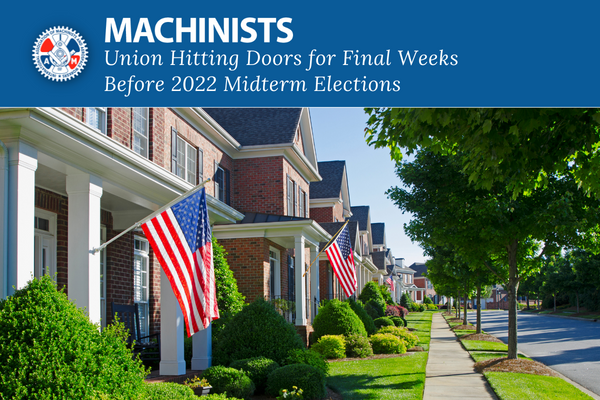 With less than two weeks until Election Day, the International Association of Machinists and Aerospace Workers(IAM) Labor 2022 campaign has already mobilized hundreds of volunteers to knock on thousands of doors.

The Machinists Union’s member-to-member program, which has been active since September, has made thousands of calls to Machinists Union members in Georgia, North Carolina, Ohio, Wisconsin, Minnesota, Pennsylvania, Arizona, and Nevada. In addition to calls, hundreds of Machinists have been deployed to the battleground states to knock on doors and gain support for endorsed candidates and issues. The Machinists Union’s member-to-member 2022 membership political education campaign is engaging in a wide range of GOTV actions, including robocalls, text messages, emails, phone banks, and leafleting at worksites.

“I want to thank all IAM members who are participating in the get out the vote efforts in the battleground states,” said IAM International President Robert Martinez Jr. “Our union is dedicated to getting worker-friendly candidates elected to office. The Biden-Harris administration needs a Congress that will move an agenda that benefits workers. We have one of the labor movement’s best Legislative and Political departments, and their political education efforts are allowing us to reach thousands of our members.”

“Our union must have a political education program that mobilizes our members to vote at the polls,” said IAM Headquarters General Vice President Brian Bryant. “We have activated the majority of our staff at our headquarters to help with the get-out-the-vote efforts in the states. We must work to get worker-friendly candidates elected up and down the ballot.”

The Machinists Union will leverage thousands of volunteer hours to reach their members in key battleground states in the remaining days before Tuesday, Nov. 8. The Labor 2022 IAM member-to-member program is crucial to help elect pro-worker candidates across the country.