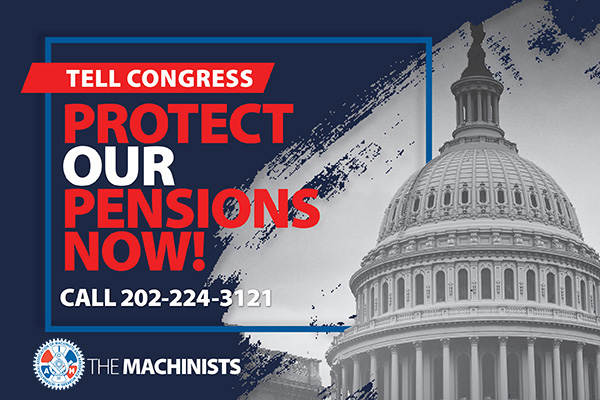 In a letter to the Ways and Means Committee, IAM International President Robert Martinez Jr. is imploring members of the Committee to support the Butch Lewis Emergency Pension Plan Relief Act of 2021 and include it in the COVID-19 relief package currently being considered by Congress. This legislation will work to lift troubled multiemployer plans out of their financial hole, while maintaining the financial integrity of the PBGC. Most importantly, this Act will provide a pathway to accomplishing these goals without stealing the earned benefits of retirees, workers and their families.

“This legislation will appropriately and adequately address the multiemployer pension crisis by providing a lifeline to plans in critical financial status while maintaining the integrity of healthy multiemployer plans and the PBGC without cutting the earned benefit promises made to our nation’s retirees and working families,” said IAM International President Robert Martinez Jr. “Not only will this legislation provide a lifeline to critical status plans, but it contains provisions to protect healthy plans from sliding into insolvency due to the current, unprecedented economic situation.”

Call your Representative at 202-224-3121 to urge them to pass the Butch Lewis Emergency Pension Plan Relief Act of 2021, and protect more than 100 multiemployer pension plans.