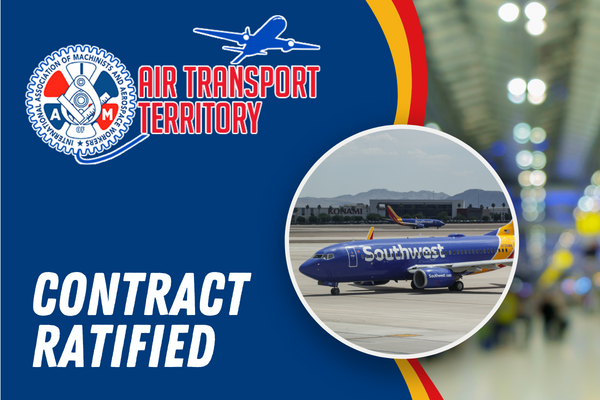 The International Association of Machinists and Aerospace Workers (IAM), North America’s largest air transport union, has overwhelmingly ratified a strong five-year collective bargaining agreement with Southwest Airlines that gives its members a 13.1% wage increase from the current wage on the date of ratification and a 25.1% general wage increase over four years putting its members at the top of the airline industry’s pay scale.

Highlights of the five-year agreement include:

Click here for full highlights of the ratified agreement.

“Congratulations to the Southwest Airlines General Chairpersons for negotiating an industry-leading contract,” said IAM International President Robert Martinez Jr. “Your solidarity helped secure a contract that serves as a model for the rest of the airline industry and improves the work-life balance for our members. I applaud IAM Air Transport General Vice President Richie Johnsen, his leadership team, and IAM District 142 leadership for delivering for our members at Southwest Airlines.”

“Our members were crystal clear on what they wanted to see in this agreement from Southwest Airlines,” said IAM District 142 President and Directing General Chair John M. Coveny Jr. “Our members should be proud knowing that they ratified an industry-leading contract as a result of their dedication and solidarity throughout the process. We’re grateful to the IAM Air Transport leadership for their guidance and expertise in making this historic agreement possible.”

This five-year agreement provides industry-leading pay and job protections for our membership. It will also offer better mandatory overtime rules and improve our members’ quality of life.

“As a Southwest Airlines Customer Service Agent who came up through the ranks, I understand how this industry-leading agreement will impact the lives of thousands of my brothers, sisters, and siblings at Southwest Airlines,” said IAM Air Transport Territory Chief of Staff Edison Fraser. “I am extremely proud of our communication with the membership to get this deal done. I appreciate Southwest Airlines and our membership’s patience through this long and tedious process.”